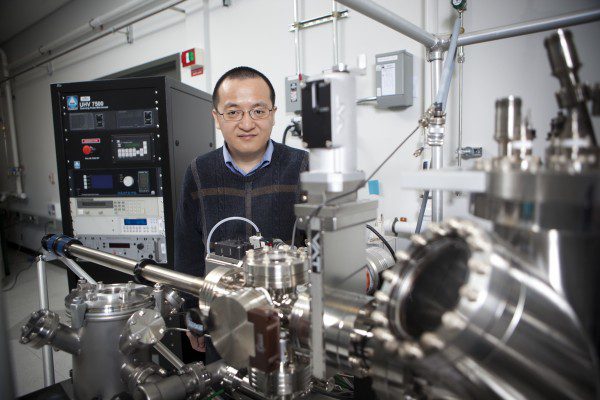 BINGHAMTON, NY – With documented public water problems in Flint, Mich., and Hoosick Falls, N.Y., caused by corrosion, understanding how copper is affected at the atomic level is critical to avoiding problems in future pipes. Corrosion-related damage costs more than three percent of the United States’ Gross Domestic Product (about $503.1 billion, going by 2013 numbers).

Using state-of-the-art in situ microscopy techniques, scientists at Binghamton University were able to watch the oxidation of copper — the primary building material for millions of miles of water piping — at the atomic level as it was happening. What they saw could help create pipes with better corrosion resistance.

“Oxidation of metals [the loss of electrons at the molecular or atomic level] is a universal reaction caused by the simple fact that the oxide of most metals is more stable than the metal itself. Resistance to corrosion or oxidation is one of the most important properties for materials exposed to air or water,” said Guangwen Zhou, associate professor of mechanical engineering at Binghamton University and co-author on the study.

“Because water is naturally corrosive, especially for pipes carrying hot water, where the elevated temperature accelerates the oxidation/corrosion rates, the Environmental Protection Agency (EPA) requires all water systems monitored for the levels of copper,” Zhou added. “The most common reason for water utilities to add corrosion inhibitors is to avoid copper corrosion. The research findings of our study on the oxidation of copper alloys can facilitate the development of new alloys with improved resistance to corrosion in water.”

Beyond water pipes, observing how copper oxidizes also sheds light on maintaining material stability in nanodevices that are used in energy and medical science. Using atomic-resolution electron microscopes, scientists demonstrated that the oxidation of copper occurs via layer-to-island growth of copper oxide on flat copper surfaces with copper atoms evaporating from the surface. Solid oxide, made of copper and oxygen atoms thermally mixing microscopically above the original surface, is deposited back on the surface. This is different from the long-held idea of a solid-solid transformation. The observation is counterintuitive because if a surface can be made more uneven, it can resist oxidation better.

“Recent advances in instrumentation have made it possible to investigate the oxidation of metals exposed to oxygen gas and elevated temperature with in situ measurements. Employment of these techniques can provide unique opportunities to establish the principles of controlling atomic processes of surface oxidation,” Zhou said. “Using these tools, we are able to gain unprecedented insight into the oxidation mechanism of copper and copper alloys.”

According to Zhou, not all oxidation is a bad thing. “(Oxidation) can lead to the formation of a protective layer against corrosion attack,” he said. “Our results establish the principles of predicting the trend for promoting or suppressing the oxidation of materials, which is much needed for smarter utilization to steer the reaction toward the desired direction for real applications such as corrosion resistance or improved chemical catalysis.”

Qing Zhu, Wissam A. Saidi, and Judith C. Yang from the University of Pittsburgh are all co-authors of the study, along with Binghamton graduate student Lianfeng Zou.

The study, “Early and transient stages of Cu oxidation: Atomistic insights from theoretical simulations and in situ experiments” was published in Surface Science.