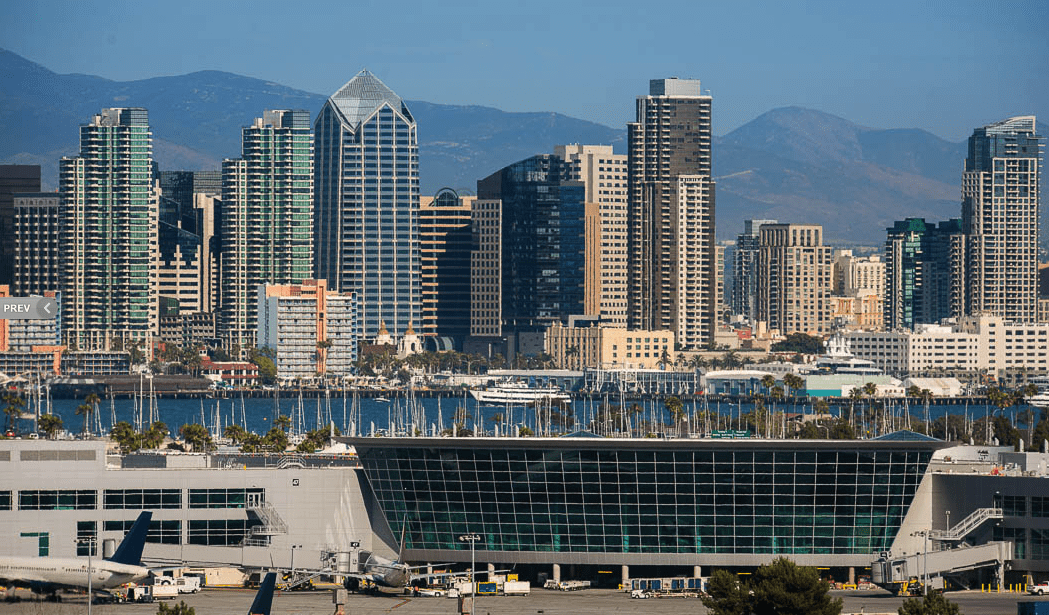 Matt Ball on May 3, 2016 - in Awards, Design/Engineering, Projects, Transportation

The Green Build development comprised a major expansion of San Diego International Airport’s Terminal 2, which included 10 new gates, a dual-level roadway, enhanced curbside check in, more security lanes, and expanded concession area. The project involved a construction timeline that began in 2009 with the construction of the apron improvements, additional aircraft parking and new USO facilities.   During the next several years, terminal construction began and parking in front of Terminal 2 was temporarily relocated to make way for construction of a dual-level roadway. In 2013, the airport’s new gates, facilities and roadway improvements opened to the public.

“The Green Build project was the largest construction in the airport’s history and now serves as a hallmark for developing future airport projects using sustainable building practices,” said President/CEO of San Diego International Airport, Thella F. Bowens. “Earning the Envision Platinum award for the project’s landside improvements – and being the first airport in the world to do so – demonstrates the airport’s commitment to taking a holistic approach to planning projects responsibly.”

“The San Diego International Green Build project has intentionally included many of the key sustainable infrastructure characteristics in its new development, including many elements from the Quality of Life, Leadership, and Resource Allocation, as well as Natural World and Climate Risk areas, which are part of the Envision system’s rating categories,” said ISI President and CEO, Bill Bertera.

The Envision rating system categories with the highest scores for the Green Build development project at San Diego International Airport include:

Quality of Life (QL): As part of the highest area rated for sustainability in the project, San Diego County Regional Airport Authority developed The Green Build project to respond to community needs that provided for current and future demand for travel, while increasing customer service and serving as an economic stimulus for the San Diego region.  Approximately 1,000 jobs were created at peak construction, with total economic impacts included an estimated nearly 5,000 jobs over the course of the project. The project also increased the quality of existing, operating and recreational capacity for the public, while improving customer experience by providing 10 new aircraft gates, a dual-level roadway that separates arriving and departing passengers, more security lanes, and an expanded concession area.  A positive outcome of the Airport Authority’s small business outreach program was that more than $415 million in contracts were awarded to local businesses, with $118 million going to small businesses, which significantly contributed to local employment, training and education with an emphasis on needy or disadvantaged groups.

Leadership (LD):  The Green Build project provided extensive leadership and commitment. The San Diego International Airport became the first major airport in the United States to publish an annual sustainability report based on the guidelines of the Global Reporting Initiative (GRI). The airport also assisted in the development of the ACI-NA four elements of the aviation industry to serve as core projects for a holistic approach to airport sustainability, which included economic viability, operational excellence, natural resource conservation, and social responsibility.  The Green Build team also provided a written commitment to address the economic, environmental and social aspects of the project at each stage, with a presentation provided at a stakeholder chartering session.

Natural World (NW): The Green Build project preserved greenfields by building on a previously developed site, which was a former burn dump and landfill, historically operated by the U.S. Navy at the San Diego Naval Training Center. The airport remediated the former landfill area to allow the Green Build project to begin. The project was designed to only include native landscaping, which requires minimal use of pesticides, herbicides or fertilizers. When pesticides and fertilizers are required, only those with low toxicity, persistence and bioavailability are used.

In addition, the project uses stormwater best management practices to protect surface water and ground water, with a scope that covers detecting and responding to spills and leaks, and providing ongoing monitoring of water quality. Annual groundwater monitoring events take place at and around the former landfill project on the Green Build property, as part of a long term monitoring program.

About San Diego International Airport: San Diego International Airport (SAN) is the gateway to the San Diego region. A record 20 million passengers passed through its doors in 2015, taking advantage of nonstop flights to 61 destinations including Tokyo and London. SAN has been in operation since 1928 and has been managed by the San Diego County Regional Airport Authority since 2003. The Airport Authority is committed to operating San Diego’s air transportation gateways in a manner that promotes the region’s prosperity and protects its quality of life. More information on the airport can be found at www.san.org.

About ISI Envision®: Envision is the product of a joint collaboration between ISI, which was founded by three national engineering associations: American Society of Civil Engineers, American Council of Engineering Companies, and American Public Works Association, and the Zofnass Program for Sustainable Infrastructure at Harvard University Graduate School of Design. Information about ISI and Envision can be found on the ISI website, http://www.sustainableinfrastructure.org/.