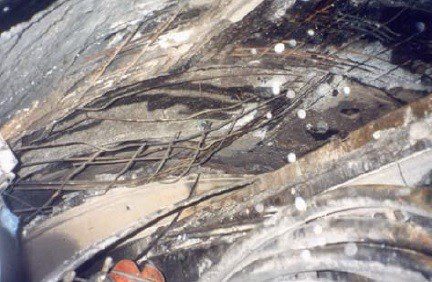 Matt Ball on May 2, 2016 - in Buildings, Corporate, Design/Engineering

Fire causes extensive financial losses due to property damage, as well as endangers the life and well-being of occupants. This has driven much interest toward the development of fire-resistant structures. However, with the low probability of fire occurrence, prescriptive design concepts provided by many codes and standards around the world can lead to substantively uneconomic designs. Also, the neglect of the interaction between the different reinforced concrete members in an assembly or an entire building subjected to fire can lead to unsafe designs. Therefore, performance-based design has increasingly become a major means of achieving safe, yet economic, designs for fire-resistant structures. This is why advanced modeling of reinforced concrete structures subjected to fire has been a main focus of researchers and structural engineers for many decades.

Advanced modeling of reinforced concrete structures subjected to fire has been treated by researchers in various ways. The most efficient way is combined thermal and structural analysis, which is a time-stepping procedure where the transient heat transfer analysis is performed at certain time intervals and the results are instantaneously used to perform the structural analysis.

Key elements in combined thermal and structural analysis are the specific models used to define the values of the thermal and mechanical temperature-dependent proper¬ties of both concrete and steel reinforcing bars. Making different choices among these models has a major effect on the overall response of reinforced concrete members subjected to fire. The degree of sensitivity can be illustrated through analyzing various reinforced concrete members tested under fire in combined thermal and structural analyses using the models provided by different codes and standards and comparing the analytical results to the experimental results. Different loading cases and fire scenarios need to be analyzed for a reliable comparison.

Thermal temperature-dependent properties of concrete including density, thermal conductivity, and specific heat capacity can be studied through transient heat transfer analyses. Mechanical temperature-dependent properties of concrete and steel reinforcing bars can be studied through combined thermal and structural analyses. These properties include thermal expansion strain, peak compressive stress and the corresponding strain, initial modulus of elasticity, tensile strength, and the shape of the stress-strain curve for concrete; and thermal expansion strain, yield stress, ultimate stress, and Young’s modulus for steel reinforcing bars.

For this purpose, combined thermal and structural analyses were carried out using VecTor3, a finite element analysis computer program that uses the advanced computational modeling procedure. On the structural analysis level, the modeling procedure uses the Modified Compression Field Theory (MCFT), a well-established concrete model with corroborated performance and intrinsic capabilities in modeling shear mechanisms in reinforced concrete. Also, VecTor3 accounts for numerous advanced behavioral mechanisms experienced by reinforced concrete under various loading conditions. In addition, variations of the thermal, physical, and mechanical temperature-dependent properties experienced by concrete and steel reinforcement when subjected to fire are taken into account.

The comparison of the results generated using the different models presented by the ASCE Manual of Practice, the former version of the Eurocode (ENV 1992-1-2:1995), and its current version (EN 1992-1-2:2004) showed major differences with the experimental results. This weakens the level of confidence in these models for a reliable performance-based design for reinforced concrete structures subjected to fire.

The research can be found in a paper titled “Reliability of Temperature-Dependent Models for Analysis of Reinforced Concrete Members Subjected to Fire,” accepted and soon to be published by ACI Structural Journal.