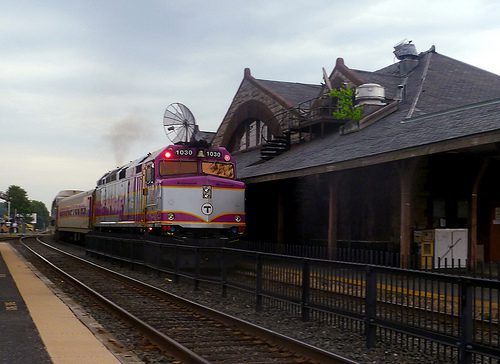 ASHLAND – Governor Charlie Baker today visited a Keolis work site in Ashland to review the progress on infrastructure upgrades the MBTA is making as part of a larger effort the MBTA, its Fiscal and Management Control Board (FMCB) and leadership are making to improve service, access, accountability and reliability for riders and taxpayers. In Ashland and along the Framingham-Worcester Commuter Rail Line, the MBTA is replacing over 26,000 rail ties between March and early June, to allow more efficient travel and lift speed restrictions due to heat that have been in place since the MBTA obtained the line in 2012. To date, over 10,000 of the 26,000 ties along the line have been installed and put the project three weeks ahead of schedule.

“Riders and taxpayers deserve and depend on a cost-effective and world-class transit system that can get them to work, school or wherever they need to be in a safe and timely way,” said Governor Baker. “Since last winter, the MBTA and its new leadership have undertaken a renewed focus on the important work of reducing costs and investing in infrastructure improvements to the core system that will ultimately mean more reliable public transit for commuters.”

The MBTA has invested over $600 million this fiscal year for State of Good Repair deferred maintenance, including an $83 million winter resiliency program, system-wide station improvements, and track, signal, and power system upgrades and the MBTA’s Fiscal Year 2016 capital investment plan calls for over $1.05 billion in long-term infrastructure, vehicle and station upgrades, including 325 new buses to replace the MBTA fleet. Additionally, a $104 million effort to refurbish 86 Green Line trolley cars is underway and the MBTA has hired a new Chief Procurement Officer to ensure timely and cost-effective investments.

“Access to reliable transportation plays a crucial role in the lives of people throughout the Commonwealth, and while we still have much work to do, the Baker-Polito Administration, MassDOT and the MBTA remain dedicated to the goal of improving the transit system for riders,” said MassDOT Secretary and CEO Stephanie Pollack.

“We continue to invest capital dollars to improve services for our riders, including the refurbishing of Green Line trolley cars and winter resiliency work to reduce weather impacts on the Red and Orange lines,” said MBTA General Manager Frank DePaola. “This work is essential to preserving the integrity of our vehicles and service.”

In June 2015, Governor Charlie Baker appointed a Fiscal and Management Control Board (FMCB) to help oversee the system’s operations and finances and increased the MBTA’s direct aid in his Fiscal Year 2016 budget by 50% to $187 million, a historic level continued into Fiscal Year 2017. The FMCB, MassDOT and MBTA have since increased the MBTA’s capital spend capacity to a record $799 million in Fiscal Year 2015 and made progress in reducing the Fiscal Year 2017 budget deficit from $242 million to $80 million; increasing own-source revenue by $10 million; reducing employee overtime hours and costs by over 50% with new leave and attendance policies; reducing dropped bus trips by 40% and energy costs by $12.5 million.  The MBTA is the fifth-largest transit agency in the U.S., serving over 1 million passengers a day.