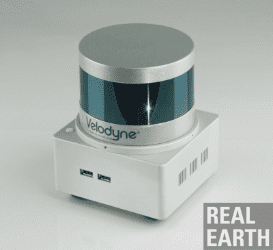 Matt Ball on April 29, 2016 - in Uncategorized
PITTSBURGH and MORGAN HILL, Calif.—Real Earth, the pioneer in real-time 3D mapping and localization, secured first place in Microsoft’s Indoor Localization Competition recently held in Vienna, Austria. Real Earthachieved the top ranking through their algorithms embedded in their STENCIL product. It was the only product to perform real time indoor localization without the use of infrastructure. In addition to having efficient algorithms, Real Earth’s success is due in part to use of the VLP-16 real-time 3D LiDAR sensor from Velodyne LiDAR, the worldwide leader in the development of real-time, 3D LiDAR sensors. The Microsoft competition continues to validate Real Earth‘s technology as the best-in-class and most accurate real-time mapping and localization solution.

The Microsoft Indoor Localization Competition is a well-known annual benchmark for assessing many approaches to indoor localization. The purpose of the competition was to bring together real-time indoor location technologies and compare their performance in the same space. The competition had nearly 50 competitors in 2D and the more challenging 3D category.

Each team had 15 minutes to locate 15 markers throughout the evaluation area, the foyer of a large facility in Vienna. All results were compared to ground truth that was   measured from a stationary terrestrial laser scanner. The competition was challenging because the venue was dynamic with many people moving throughout the space.

Real Earth was the only team to not rely on infrastructure in the 3D category and used only onboard sensors to provide localization. At the completion of the competition, the results showed Real Earth’s device to have the most accurate localization with 0.16-meter average error compared to ground truth.

Kevin Dowling, CEO of Real Earth said, “It has been exciting to be part of this competition and watch our algorithms perform in difficult and dynamic environments. I have seen LiDAR devices evolve since the 1980s from expensive large and heavy devices the size of a microwave oven to the small and lightweight devices of today, such as the Velodyne units. The developments in the near future will prove to be even more exciting as both autonomous and non-autonomous vehicles incorporate these devices.”

“As Real Earth’s success demonstrates, 3D LiDAR is a critical new element in effective and efficient localization,” said Mike Jellen, President and COO, Velodyne LiDAR. “The high resolution and mobility of the VLP-16 LiDAR Puck means faster inspections, and the 360 degrees of freedom our sensors deliver is ideal for data-gathering within enclosed facilities.  While Velodyne LiDAR is already the established leader for vehicle-based mobile mapping, this kind of performance – in the absence of infrastructure or GPS accessibility — opens the door to scanning buildings from the inside, and leads to an array of new and exciting applications.”

Real Earth will continue to build on the success of this competition by developing and improving software, algorithms, and products to produce the most accurate and reliable mapping and localization solutions for customers. Customers currently include automotive companies, construction   companies, utilities and many others who need questions answered quickly, accurately and at the point of work.

About Real Earth
Real Earth maps the world around us using high speed sensing and best-in-class software to both map and localize in real-time. Real Earth use no existing maps, no GPS, and no infrastructure. Real Earth makes and licenses their software, makes physical devices and provides software as a service. Real Earth, founded in 2015, is located in Pittsburgh, PA, a center of robotics technology and businesses.
For more information, visit http://www.realearth.us/

About Velodyne LiDAR
Founded in 1983 and based in California’s Silicon Valley, Velodyne LiDAR Inc. is a technology company known worldwide for its real-time LiDAR (light detection and ranging) sensors.  The company evolved after founder/inventor David Hall competed in the 2004-05 DARPA Grand Challenge using stereovision technology.  Based on his experience during this challenge, Hall recognized the limitations of stereovision and developed the HDL-64 Solid-State Hybrid LiDAR sensor.  Velodyne subsequently released its compact, lightweight HDL‑32E sensor, available for many applications including UAVs, and the new VLP-16 LiDAR Puck, a 16-channel real-time LiDAR sensor that is both substantially smaller and dramatically less expensive than previous generation sensors.  Market research firm Frost & Sullivan has honored the company and the VLP-16 with its 2015 North American Automotive ADAS (Advanced Driver Assistance System) Sensors Product Leadership Award. Since 2007, Velodyne LiDAR has emerged as the leading developer, manufacturer and supplier of real-time LiDAR sensor technology used in a variety of commercial applications including autonomous vehicles, vehicle safety systems, 3D mobile mapping, 3D aerial mapping and security.  For more information, visit www.velodyneLiDAR.com.