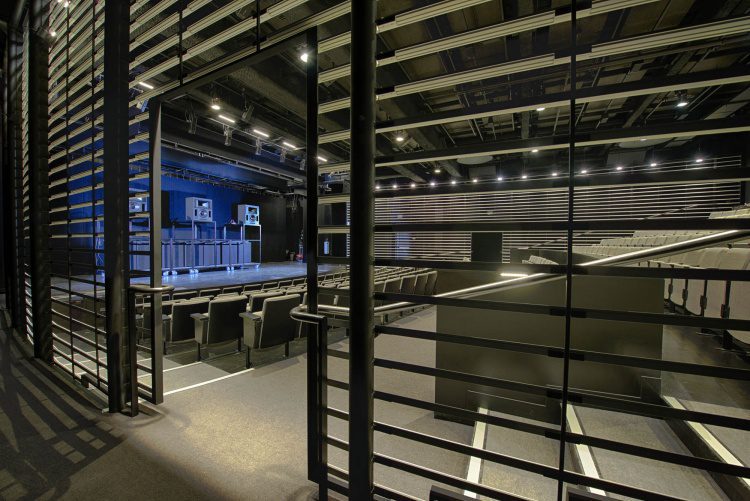 SAN FRANCISCO, Calif., April 28, 2016—The architectural firm of EHDD will be part of another major museum opening when the San Francisco Museum of Modern Art (SFMOMA) expansion opens on May 14, 2016. EHDD served as both Associate Architect on the Snøhetta-designed expansion as well as the architect for additional renovations throughout the original Mario Botta-designed building and new expansion spaces.

Significantly, EHDD also had the opportunity to lend high level technical expertise to this project with its design of the newly-renovated Phyllis Wattis Theater, an important part of the overall SFMOMA expansion, given the theater’s constant use for film, lectures, meetings, and live performances. As part of the expansion, half of the original Wattis Theater was removed and replaced, keeping the same seating capacity as the original theater design of 275 seats.

EHDD Principal Duncan Ballash said, “The primary design goal for the Wattis Theater renovation was flexibility. The Wattis is really a workhorse space for SFMOMA, allowing them to do public lectures, screening of art films and more, as well as to be able to gather staff together – that flexibility was key. As the design progressed, it became clear that there were constraints due to the new program, structure, and systems surrounding this existing theater, creating challenges for the performance and acoustical goals. As I considered these design challenges, I immediately thought this would be a great project for Meyer Sound.”

EHDD designed an intimate raked seating space wrapped by “transondent” – acoustically transparent –walls, which function similarly to audio speaker covers or grills. These slatted walls allow speakers mounted on the outer perimeter walls to project sound through the transondent walls and into the seating chamber without interference. The semi-transparent quality of the transondent walls also allows people to move behind them, from the audience seating up to the stage, without disappearing from view, as they did in the original design.

SFMOMA partnered with Meyer Sound to deliver optimal acoustics and flexibility of programming, including the installation of a Meyer Sound Constellation® acoustic system for active acoustics, as well as Meyer Sound cinema and sound reinforcement systems for film and live amplified events, respectively.

“Constellation provides the utmost flexibility in the Wattis Theater,” stated Pierre Germain, Constellation design manager at Meyer Sound. “It transforms the space from a cinema to a chamber music hall, symphony hall, or a cathedral at the press of a button. Constellation is also the perfect complement to the aesthetics of the theater, including small speakers that blend in with the carefully designed, acoustically transparent walls that generate the important sound reflections that solid walls would have provided.”

Beyond the Phyllis Wattis Theater, SFMOMA featured a Meyer Sound system in another flexible performance and event space known as the White Box. With the goal to introduce cutting edge sound systems to flexible performance spaces, EHDD has also partnered with Meyer Sound on other large scale theater projects, including two theaters in the newly re-opened Berkeley Art Museum and Pacific Film Archive (BAMPFA) and San Francisco’s Exploratorium, which opened in 2013.

“EHDD takes great pride in the designs that arise out of the challenges inherent in our projects,” said Ballash. “Collaborating with high tech providers like Meyer Sound has given us opportunities to elevate our projects to the next level. These challenges range from designing a million gallon tank for the Monterey Bay Aquarium to support a white shark in captivity for the first time ever, to converting a pier building on San Francisco’s waterfront into a net zero energy science center, to our current work, the Pacific Visions expansion at the Aquarium of the Pacific (Long Beach, California) which will provide an immersive theater experience utilizing sight, sound, movement and touch, allowing patrons to virtually swim the oceans with whales.”

About EHDD: EHDD is an award winning, nationally recognized architecture firm based and founded in San Francisco – a city known for embracing ideas about the future. This ethos has informed their work since the beginning, resulting in forward-thinking designs that last for generations, such as the Monterey Bay Aquarium in Monterey, CA, which just received the prestigious 2016 AIA Twenty Five Year Award, City College of San Francisco, Chinatown/North Beach Campus and the Lands End Lookout & Visitor Center, both in San Francisco, CA. EHDD has also designed both the first and the largest Net Zero Energy projects certified by the International Living Future Institute, the IDeAs Office Building in San Jose, CA and the David and Lucile Packard Foundation Headquarters in Los Altos, CA, respectively.

About SFMOMA: Founded in 1935 as the first West Coast museum devoted to modern and contemporary art, a thoroughly transformed SFMOMA with significantly enhanced gallery, education, and public spaces opens to the public on May 14, 2016. With six art-filled terraces, a new sculptural staircase and Roman steps where the public can gather, access to 45,000 square feet of free, art-filled public space, and free admission for visitors age 18 and younger, SFMOMA is more welcoming and more connected to San Francisco than ever before.