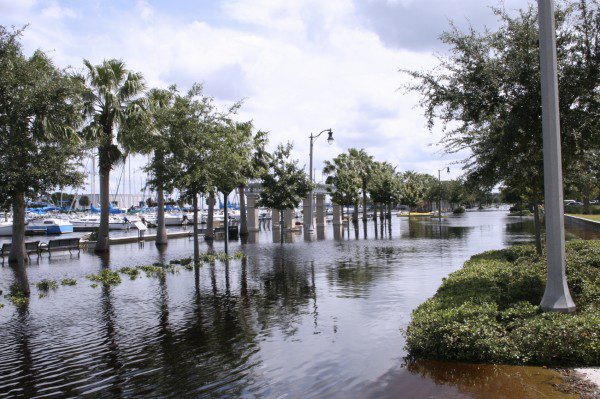 Just as parts of South Florida are bracing for potential risks of flooding in low-lying areas due to the close proximity of the moon, high tides, sea-level rise and inclement weather, Florida Atlantic University is spearheading efforts to bring together professionals from the private sector as well as the public sector to help identify solutions and develop adaptation pathways.

“Connected Futures from Alaska to Florida,” FAU’s third Sea-level Rise Summit, will take place from Tuesday, May 3 through Thursday, May 5 at the Hyatt Regency Pier 66, 2301 SE 17th St., in Fort Lauderdale. The summit will bring together sustainability professionals from the private sector – including insurance companies, realtors, architects and developers – who will join leading scientists, decision-makers and members of the public sector.

“While Florida and Alaska are on the opposite ends of the continent, they share mutual concerns of the imminent challenges presented by environmental changes,” said Colin Polsky, Ph.D., director of the Florida Center for Environmental Studies at FAU. “The rapid melting of Arctic ice is threatening coastal locations globally, and impacts include increased flooding from sea-level rise in Florida to infrastructure instability from permafrost melting in Alaska.”

The aim of the summit is to compare and contrast the unfolding impacts and response in these different regions to identify and highlight opportunities for building coastal resilience both locally and globally. The subtropics and the Arctic are rarely discussed together, and comparing shared experiences is expected to unlock new insights. Stakeholders in both regions will identify globally relevant public policy and private adaptation strategies to lessen the impacts everywhere.

“Like the Arctic, South Florida is one of the world’s most vulnerable areas to climate change, especially sea-level rise,” said Polsky. “In Florida, potential adaptation to sea-level rise is complicated by the porous limestone geology of the region, permitting salt water intrusion into important aquifers. The low level terrain in many areas makes even a relatively small sea-level rise problematic.”

Since the United States assumed chairmanship of the eight-nation Arctic Council for the period 2015-17, the U.S. State Department has highlighted how ice melting in the Arctic affects people, infrastructure and ecosystems worldwide, multiplying risks around the world.

“Coastal cities are critically important for our economy and society, and are facing unprecedented environmental challenges,” said Polsky. “This summit will break new ground by pairing two coastal regions that are both experiencing environmental challenges, but are already working to adapt to these changes. By tapping into the collective wisdom of the participants, the summit will result in a living document titled ‘Adaptation Pathways 1.0.’ that will serve as a blueprint for other coastal communities throughout the world.”

FAU’s Sea-Level Rise Summit will open with a pre-summit examination of the science, commencing with a presentation by NASA Jet Propulsion Lab. The following two days will include facilitated panel sessions and interactive visioning activities covering topics such as the economic implications of sea-level rise, impacts on infrastructure, health and livelihoods, and response success stories.

FAU’s summit is supported in part by the Canadian, British and Dutch Consulates in Miami; the Chambers of Commerce of Greater Fort Lauderdale and Miami Beach; the U.S. Geological Survey; World Resources Institute; Union of Concerned Scientists; Florida Climate Institute; and FAU. The summit is open to the general public, agencies, decision makers, businesses, planners, researchers, risk management offices, and other interested parties.

Registration is $300 and includes materials, conference app, all sessions and panels, the evening opening reception in the Pier Top Ballroom on Tuesday, May 3, as well as the main reception, two breakfasts, two lunches and all breaks.

For more information or to register, visitwww.ces.fau.edu/arctic-florida o