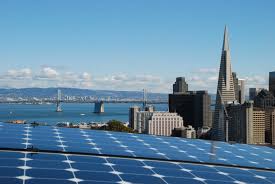 “By increasing our use of solar power, San Francisco is once again leading the nation in the fight against climate change and the reduction of our reliance on fossil fuels,” said Supervisor Wiener. “Activating underutilized roof space is a smart and efficient way to promote the use of solar energy and improve our environment. We need to continue to pursue aggressive renewable energy policies to ensure a sustainable future for our city and our region.”

The legislation has the support of the San Francisco Commission on the Environment, the U.S. Green Buildings Council, the Building Inspection Commission, and Brightline Defense, a non-profit that supports the creation of sustainable environments in low-income communities and communities of color.

Under existing state law, California’s Title 24 Energy Standards require 15% of roof area on new small and mid-sized buildings to be “solar ready,” which means the roof is unshaded by the proposed building itself, and free of obtrusions. This state law applies to all new residential and commercial buildings of 10 floors or less.

Supervisor Wiener’s ordinance builds on this state law by requiring this 15% of “solar ready” roof area to have solar actually installed. This can take the form of either solar photovoltaic or solar water panels, both of which supply 100% renewable energy.

Mayor Ed Lee and former Mayor Gavin Newsom have both pushed for a policy that San Francisco meet 100% of its electricity demands through renewable energy. The Department of the Environment and the Environment Commission have been tasked with supporting and creating programs that satisfy this policy, including promoting the use of solar energy.