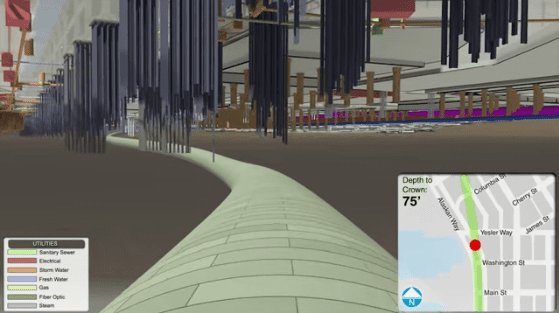 Matt Ball on April 20, 2016 - in Construction, Corporate, Transportation
Drivers and transit users, pay heed: there are 14 days to get ready for a closure of the State Route 99 Alaskan Way Viaduct through downtown Seattle. Starting Friday, April 29, the Washington State Department of Transportation will close the viaduct between South Spokane Street and the south end of the Battery Street Tunnel.
This closure is expected to start prior to the morning commute and last approximately two weeks as the SR 99 tunneling machine Bertha digs underneath the roadway near Yesler Way.
Roughly 90,000 vehicles use the viaduct each day. Because the structure is one of three major north/south highways in the greater Seattle area, WSDOT expects this closure to have a significant effect on the region’s commute.
“When we closed the viaduct for nine days in 2011, we saw significant congestion on Seattle city streets and nearby highways,” said David Sowers, deputy administrator of the Alaskan Way Viaduct Replacement Program. “We’ll do everything we can to ease congestion, but unfortunately there’s no way to close a major highway without disrupting traffic.”
WSDOT, the Seattle Department of Transportation, King County, the Port of Seattle and other agencies around Puget Sound have joined forces to help drivers and commuters plan for the closure and change their normal routines. A website dedicated to the closure – www.99closure.org – lists resources and ideas on ways to adjust commutes and work schedules.
“We understand this closure will be a major inconvenience for many drivers, but we need their help to keep traffic moving,” said Sowers.  “We will all get through this together if everyone starts the planning process now and adjusts their commutes.”
WSDOT is working with partner agencies to provide standby buses, more real-time traffic monitoring, police officers at key intersections to keep traffic moving, additional water taxi capacity, additional response vehicles to clear accidents quickly and more.
Some options for commuters to consider
Closing the viaduct during tunneling will enable better monitoring of the structure and allow for quick repairs if any ground movement from tunneling should occur.
In addition to strengthening measures taken by WSDOT over the years, the SR 99 Tunnel contract also directed Seattle Tunnel Partners to protect the viaduct during tunneling. The video below shows how the viaduct has been strengthened and protected.