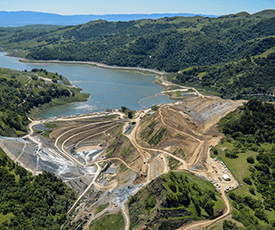 The construction of a new 1,550-foot-long spillway utilizing 40,000-cubic-yards of concrete has now been completed at the Calaveras Dam Replacement in Sunol, Calif. The project will replace the original dam, built in 1925, with a new 210-foot-high earth and rock fill dam designed to accommodate earthquakes on the Calaveras Fault.

The San Francisco Public Utilities Commission has awarded a $500 million construction contract to the joint venture of Dragados USA, Flatiron and Sukut Construction.

Construction of a new intake/outlet tower consisting of a 20-foot-diameter by 163-foot-deep vertical shaft and three new tunnels to convey water to and from the reservoir is complete and the outlet works are under construction now with plans to complete the work this summer.

The Calaveras Dam is part of the Hetch Hetchy Regional Water System that provides drinking water to 2.6 million people in Alameda, Santa Clara, San Mateo and San Francisco counties. Since 2001, after Calaveras Dam was deemed seismically unsafe by the California Division of Safety of Dams, water levels in the reservoir have remained at 40 percent of full capacity. The project will allow the water levels back to the historic capacity of 31 billion gallons.

The replacement project is part of the SFPUC’s $4.8 billion Water System Improvement Program to repair, replace, and seismically upgrade the aging pipelines, tunnels and reservoirs in the Hetch Hetchy Regional Water System.