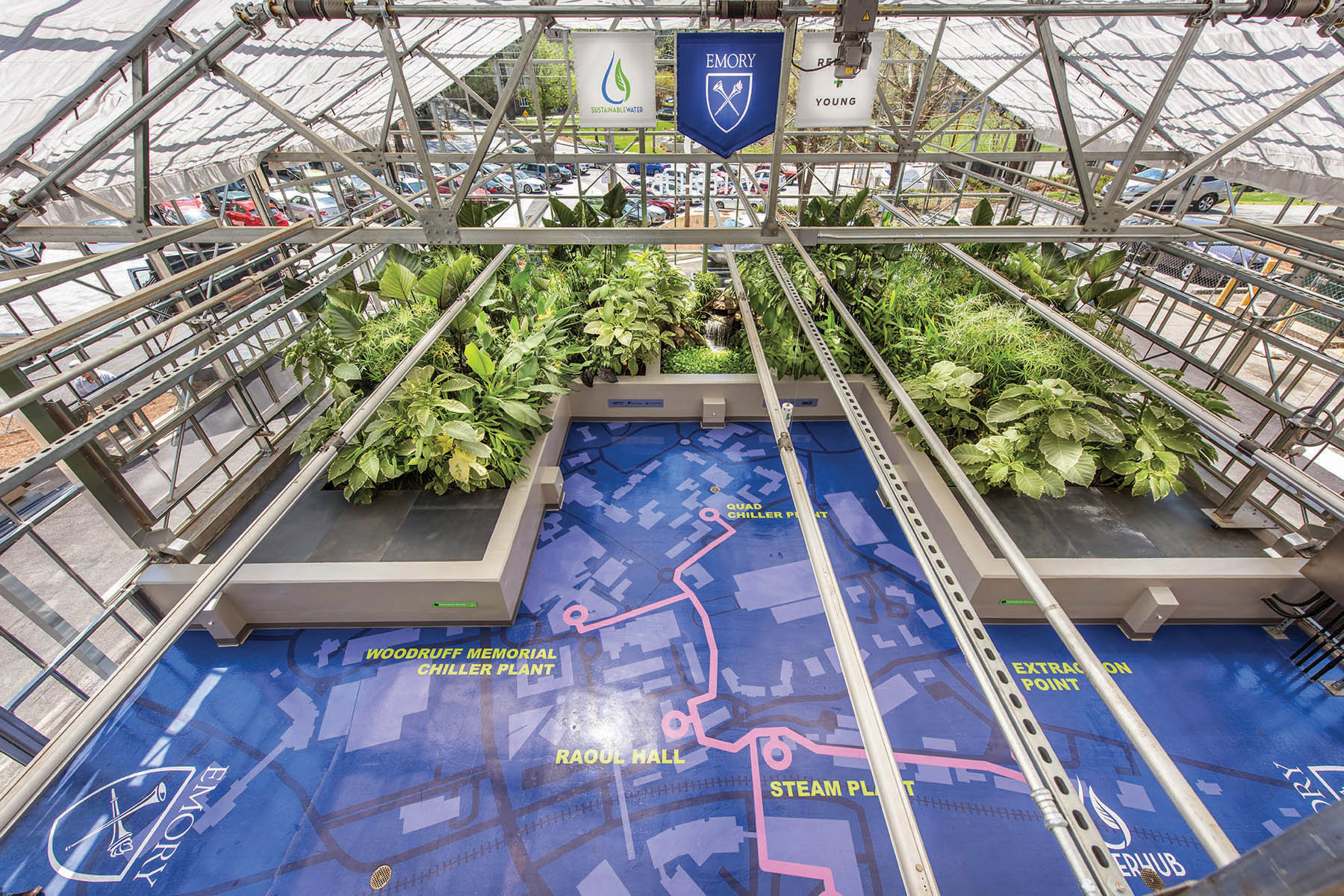 ACEC’s annual Engineering Excellence Awards (EEA) competition honors the year’s most outstanding engineering accomplishments. A panel of 25-30 judges from around the U.S. who represent a cross section of industry, government, academia and media, review and rate projects from around the world. The panel selected 24 top award winners—16 Honors Awards and 8 Grand Awards—based on uniqueness and innovative applications; future value to the engineering profession; perception by the public; social, economic, and sustainable development considerations; complexity; and successful fulfillment of client/owner’s needs, including schedule and budget.

“McKim & Creed is incredibly proud to be a part of such a phenomenal and unique project as the WaterHub at Emory,” said McKim & Creed Senior Vice President Tim Baldwin, PE, who accepted the award on behalf of McKim & Creed, along with President and CEO John T. Lucey, Jr., PE.

The first system of its kind installed in the United States, the WaterHub is a campus-scale water reclamation system serving Emory University’s main campus in Atlanta, Georgia. The WaterHub utilizes an eco-engineered treatment process to recycle nearly two-thirds of campus wastewater production – reducing the use of potable water by up to 40 percent. This new system creates a more resilient campus and mitigates risk by generating an alternative supply for critical heating and cooling operations, while consistently providing significant cost savings for utility operations.

The WaterHub at Emory was constructed at no capital expense to the end user under an innovative Water Purchase Agreement. Water savings produced by the project are used to pay off the cost of the facility. Since its commissioning in May 2015, the system has saved Emory over 40 million gallons of potable water. At full build-out, the WaterHub is capable of displacing 146 million gallons of water annually and is expected to save millions of dollars in water utility costs for the University over a 20-year period. Gina McCarthy, administrator of the US Environmental Protection Agency, toured the WaterHub at Emory last year, calling it “a model for us all.”

The project has won numerous awards and accolades, including 2015 Project Achievement Award by Construction Management Association of America South Atlantic Chapter; 2015 Innovative Project of the Year by the WateReuse Association; 2015 Atlanta E3 Award (liquid assets category) by the Metro Atlanta Chamber; 2015 Superior Environmental Performance award by Georgia Safety, Health and Environmental Conference and the Georgia Chapter of the American Society of Safety Engineers; 2015 Innovative Deal of the Year by Urban Land Institute—Virginia; 2016 Engineering Excellence Grand Award by the American Council of Engineering Companies North Carolina; and the 2016 inaugural Fulcrum Award by Southface. Magazines such asDistrict Energy, Industrial WaterWorld, CE News, The Georgia Operator and Sustainable Business Magazine have published articles highlighting the WaterHub for its design as a replicable, sustainable wastewater management solution.

McKim & Creed served as the engineer on the design-build team for the WaterHub at Emory that included Sustainable Water as the project consultant and Reeves Young as the contractor.

About Emory University:Emory University is a top-tier institution recognized for its medical school and various professional programs, as well as its commitment to environmental sustainability. Nearly 15,000 students attend the university.