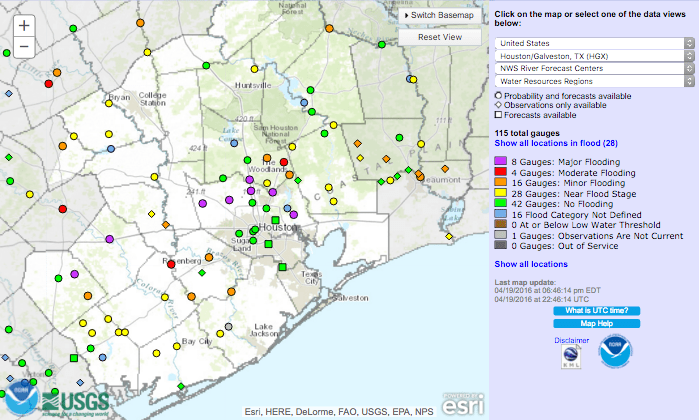 Houston has been hit very hard by rains and flooding this week. Some parts of Houston received 17 inches of rain in less than 24 hours on Monday. The flooding has claimed six lives with more than 1,200 high-water rescues and more than 1,000 homes evacuated with an estimated $5 billion in damage.

While some areas are now in recovery mode from flash floods, other areas are preparing for more. Cypress Creek in northwest Houston has continued to rise and more rain is forecast for Wednesday.

Nine counties in Texas are in a state of disaster with 123,000 homes without electricity at one point during the storm.

Peaks of record have been recorded on several tributaries to the San Jacinto River, including Spring Creek, Cypress Creek, and Willow Creek.
At least 5 peaks of record have been recorded across the state during this event. Currently, there are flooding concerns in the western part of the Houston metro area as Barker and Addicks Flood Control Reservoirs are predicted to hold record pools, as well as in Central Texas as the Colorado and Brazos Rivers are reaching NWS flood levels.

The Addicks and Barker Dams along Interstate 10 and Highway 6 are being watched closely in Houston’s west side. They are expected to fill to more than 50 percent of capacity and would greatly impact property and safety if they were to breach.

The rapid escalation of the storm, with rain rates as high as four inches per hour, caught many off guard and left them stranded in their cars or homes.