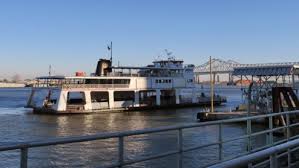 In November 2015, DOT awarded a $10 million grant for this project through the Obama Administration’s Transportation Investment Generating Economic Recovery VII (TIGER) competitive grant program. In total, the $15 million New Orleans Canal Street Ferry Terminal project will further anchor the redevelopment and revitalization along the Mississippi River as part of the city’s 300th anniversary in 2018.

“New Orleans’ ferry system is a treasured institution and strong economic driver for our region,” New Orleans Mayor Mitch Landrieu said. “With the new terminal, we are creating jobs and more convenient access for residents and visitors, while simultaneously ensuring that our residents on both banks of the river are served by this important public transportation service.

RTA Chairman Salvador G. Longoria said, “I am very excited and thrilled that the RTA has been awarded the Passenger Ferry Grant which completes the funding requirements for the project. This will include a new ferry terminal, wharf infill, rail connection, a bus terminus and last, but certainly not least, new buses.”

Justin T. Augustine, III, Vice President of Transdev in service to the RTA, said, “This project will not only enhance the passenger experience but will also beautify and improve the functionality of the New Orleans Riverfront. Transdev and conjunction with the City, State and the RTA will continue to strive for improved multimodal transit amenities in the Greater New Orleans area.”

In addition to a new ferry terminal, the New Orleans Canal Street Ferry Terminal project will include streetcar access to the New Orleans Convention Center, double ferry dock capacity, more convenient bus bay access as well as an expanded RTA bus fleet. Replacing the current 90-year old ferry terminal with a new, modern facility will provide enhanced amenities and pedestrian access to the city’s Riverfront area for both residents and tourists. The new ferry terminal will be approximately 10,000 square-feet, energy efficient and ADA-compliant. The New Orleans Ferry Service serves 858,000 passengers annually, providing a much needed link between residential, educational and commercial areas of New Orleans. This project will increase the efficiency and effectiveness of the transportation system and the movement of workers, bolstering local tourism and supporting ongoing Riverfront development efforts.

U.S. Representative Cedric Richmond said, “I have stressed the importance of this project to the Administration, including Vice President Biden during his recent visit to New Orleans, and it’s clear they have been listening. The Canal Street Ferry Terminal will connect people from all over the region to jobs, increase development along the Mississippi River, and lead to greater economic activity throughout the state. I look forward to its completion and the boost it will give our economy.”

U.S. Representative Ralph Abraham, M.D. said, “The enhancement of this ferry terminal is an important part of the equation when you talk about revamping the areas around Canal Street and the World Trade Center. I want to see New Orleans continue to thrive and remain one of the top tourist destinations in the nation, and projects like these further that mission. I’m proud to have supported this grant, and I appreciate the Federal Transit Administration for awarding it to the city.”

District C Councilmember Nadine M. Ramsey said, “This is very exciting news. The additional funding will turn into a huge win for the ferry terminals on both the East and Westbank, making it easier for locals and tourist alike to enjoy all that both sides of the Mississippi have to offer.”

District D Councilmember Jared C. Brossett said, “The award of $5 million in additional grant funding from the United States Department of Transportation to develop a new ferry terminal at the end of Canal Street is great news and we should celebrate this investment as well as the hard work that the team at Regional Transit Authority has put in to get us here. The New Orleans Canal Street Ferry project will replace the existing Ferry Terminal and revamp the Riverfront. Right now is an exciting time in New Orleans. Every day, we are seeing new developments that are creating a safer and more convenient transportation infrastructure for both residents and tourists alike. What gets me excited – and what should get all New Orleanians excited – is the opportunities that will come from this project and the $650 million North Terminal Project at Louis Armstrong International Airport. As Council Transportation and Airport Committee chair, I commit to continue to work with all stakeholders and interested parties every step of the way to take advantage of the significant transportation opportunities before us.”

Cedric Grant, Executive Director of the Sewerage and Water Board who also oversees all integrated infrastructure said, “Redevelopment of the current Canal Street Ferry terminal into an efficient multi-modal transportation center is a top priority. Because of the central location of the ferry terminal, it has the unique ability to provide critical public transportation to our 483,000 residents as well as our 9 million annual tourists. The new ferry terminal will allow us to redesign our Riverfront so that there is a seamless transition from the Outlet Collection at Riverwalk to Woldenberg Park.”

Louisiana Department of Transportation and Development Secretary Shawn Wilson, Ph.D. said, “RTA and Transdev have done an excellent job maintaining this privatized ferry service in the New Orleans area. With these dollars, the community will be able to take advantage of opportunities to further integrate all modes of public transit.”