/ Awards / ACI Recognizes Contributions and Dedication to the Concrete Industry

ACI Recognizes Contributions and Dedication to the Concrete Industry 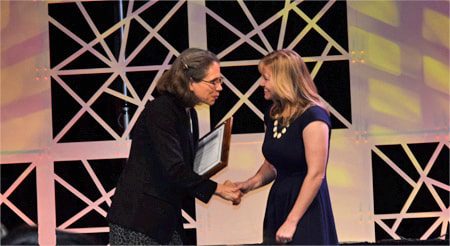 FARMINGTON HILLS, Mich., April 18, 2016—On Sunday, April 17, 2016, the American Concrete Institute (ACI) recognized over 100 professionals, groups, and companies for their outstanding contributions and dedication to ACI and the concrete industry. Awards were presented during The Concrete Convention and Exposition Opening Session and Awards Program, in Milwaukee, Wisc.

The Awards Program began with the induction of Honorary Members, ACI’s highest honor, which recognizes persons of eminence in the field of the Institute’s interest, or one who has performed extraordinary meritorious service to the Institute. The following five individuals were inducted as Honorary Members: John A. Bickley, David Darwin, Vitervo Astrubal O’Reilly Diaz (posthumously), W. Calvin McCall, and Cloyd E. (Joseph) Warnes.

ACI also inducted new 50-Year Members, and recognized these 25 individuals for maintaining their membership and participating in ACI activities for at least five decades. Next, ACI honored 30 Fellows for their outstanding contributions to the production or use of concrete materials, products, and structures in the areas of education, research, development, design, construction or management. Go to Awards at www.concrete.org for a complete listing of the Honorary Members and Fellows that were honored.

The evening concluded with the presentation of the following medals and awards that recognize exemplary achievement, groundbreaking research, and service to ACI and the concrete industry:

The Wisconsin Ready Mixed Concrete Association (WRMCA), established in 1939, is a nonprofit professional organization committed to strengthening the ready mixed concrete industry in Wisconsin and Michigan’s Upper Peninsula (UP). Since its inception, the Association has developed its structure and membership and is proud to represent over 100 member companies.

Learn more about each of the awardees listed above at www.concrete.org.