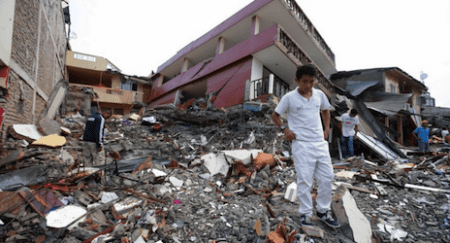 Most seismicity in the Kyushu region is related to the subduction of the Philippine Sea plate at depth. Just thirteen M 5+ earthquakes have occurred at shallow depths (< 50 km) within 100 km of the April 2016 events over the preceding century. Since the April 14, M 6.2 event (12:26:36 UTC), 19 other shocks have been located, including the latest M 7.0 earthquake.

The April 16, 2016 M 7.8 earthquake, offshore of the west coast of northern Ecuador, occurred as the result of shallow thrust faulting on or near the plate boundary between the Nazca and Pacific plates. The earthquake occurred in Ecuador’s tourist towns and has killed an estimated 350 people and injured thousands.

Ecuador has a history of large subduction zone related earthquakes. Seven magnitude 7 or greater earthquakes have occurred within 250 km of this event since 1900. Subduction along the Ecuador Trench to the west of Ecuador, and the Peru-Chile Trench further south, has led to uplift of the Andes mountain range and has produced some of the largest earthquakes in the world, including the largest earthquake on record, the 1960 M 9.5 earthquake in southern Chile.

While coincident in timing, scientists indicate that these earthquakes on opposite sides of the globe are not connected.

“These earthquakes are a reminder of how important it is that we apply the highest standards possible when building in earthquake zones,” says Robert Glasser, the head on the UN Office for Disaster Risk Reduction. “It is buildings and damaged infrastructure which kill people when an earthquake strikes.”

Earthquakes and tsunamis are relatively rare natural hazards but they account for nearly 750,000 deaths over the last 20 years and very significant economic losses. Urbanization within highly seismic zones has accelerated significantly in recent years and it is vitally important that this is done in a way that is earthquake-resistant for future generations.

“Implementation of the global plan for reducing disaster losses, the Sendai Framework for Disaster Risk Reduction requires avoiding building on land susceptible to liquefaction, landslides and subsidence in the event of an earthquake,” says Glasser. “We need to build better in the first place and not just build back better after the event.”