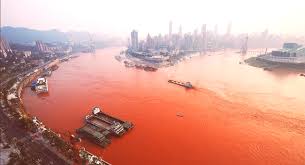 Beijing—The Nature Conservancy (TNC) released the China Urban Water Blueprint showing nature can be key to improving water quality for more than 150 million people. The report analyzes the state of water sources tapped by China’s 30 largest and fastest growing cities, including Beijing, Shanghai, Guangzhou and Wuhan and found that 73 percent of these watersheds face significant pollution, impacting the water quality for millions of people.

While China encompasses almost 20 percent of the world’s population, the country contains only 7 percent of the world’s freshwater, leaving it with much less annual freshwater available per capita than most other countries. Clean and safe water supplies are vital for the well-being of city residents and sustainable economic development. The report notes that two-thirds of China’s population lives in cities, and the health of water catchments directly impacts the lives and socio-economic status for 860 million people and US$2.7 trillion in economic activity.

The report found that less than 6 percent of China’s land mass provides more than two-thirds of the countries water supply. Pollution limits the amount of water available for use, with one-third of the country’s lakes and rivers no longer suitable for human consumption. In China, non-point source water pollution is mostly caused by land development and agricultural production.

The report suggests that nature can be key to tackling water quality issues such as nutrient and sediment pollution. By targeting conservation strategies, including reforestation and improved agricultural practices, to roughly 1.4 million hectares, sediment and nutrient pollution could be measurably reduced – by at least 10 percent – in these small to medium sized water catchments. These conservation strategies have the potential to improve water quality for more than 150 million people.

At the China Urban Water Blueprint press conference in Beijing, Andrea Erickson, Managing Director of Water Funds for The Nature Conservancy said, “Pollution of China’s limited water resources continues to increase as a result of important economic activities such as industrial and agricultural production. Working collaboratively, The Nature Conservancy is committed to improving the health of water catchments where conservation strategies can improve water quality for people and nature.”

The scientists noted in the Blueprint that the costs of treating pollutants in water sources can be reduced by using conservation strategies. For half of the cities analyzed, a savings in water treatment could offset a significant portion of the catchment conservation costs. In four cities (Harbin, Ningbo, Qingdao, Xuzhou), conservation could effectively be cost-neutral.
Zhu Jiang, Deputy Director of the International Cooperation Center of the Ministry of Water Resources said at the conference, “The power of nature to solve water crises should not be underestimated. In China, developing a natural model for water treatment can not only protect urban water source catchments to ensure water safety, but effectively lower the costs of water treatment.”

The study suggests that government, businesses and local stakeholders should work closely together to tackle the water challenge. Adopting a cooperative water fund model can provide a finance and governance mechanism for a large-scale conservation action. When designed properly, water funds enable public and private water users to become investors in their water sources, improving water quality. Water funds also provide a range of co-benefits to

The water fund model has been used around the world, from Ecuador to Kenya. TNC is facilitating the establishment and operation of more than 30 water funds. TNC China launched its first water fund in 2015 in the Longwu Reservoir in Hanghu County, Yuhang, Zhejiang Province. TNC scientists came to Longwu and explored a water fund trust management model to protect water sources. Wanxiang Trust obtained the management rights of the reservoir’s forest lands and developed different environment-friendly business activities to gradually improve the local ecosystem.

The International Union for Conservation of Nature (IUCN), Beijing Normal University and Peking University-Lincoln Institute Center for Urban Development and Land Policy served as research partners for the report. Ecolab, through its foundation, served as the lead sponsor of the report.

Dr. Zhu Chunquan, Country Representative of IUCN China said, “China is growing fast, but faces the dual challenges of water quality and quantity. The current situation of water sources is not desirable and needs people from all walks of life to address the issue and show their support.”

After the press conference, all attendees including experts and representatives from government and other conservation organizations discussed ecological ways to treat and conserve water resources. The group expressed their vision to apply these ideas and methods in more areas that are suitable for the ecological water protection model.

The full report is available for download at http://water.nature.org/waterblueprint/

About The Nature Conservancy

The Nature Conservancy (TNC) is a leading conservation organization impacting conservation in 69 countries around the world to protect ecologically important lands and waters for nature and people. To date, TNC and its more than one million members have helped protect 130 million acres worldwide. TNC distinguishes itself from other nature advocacy groups by adopting a non-confrontational, business-like and scientific approach to conservation. Of TNC’s 400 staff members in Asia Pacific, over half are scientists. TNC has been in Asia Pacific for 25 years, starting with our first project in Micronesia and now also covering conservation programs in Australia, China, Hong Kong, Indonesia, Mongolia, Myanmar, New Zealand Papua New Guinea and the Solomon Islands. TNC also has two multi-country projects covering Southeast Asia and the Coral Triangle. To learn more about the conservation work of TNC, please visit: www.nature.org.