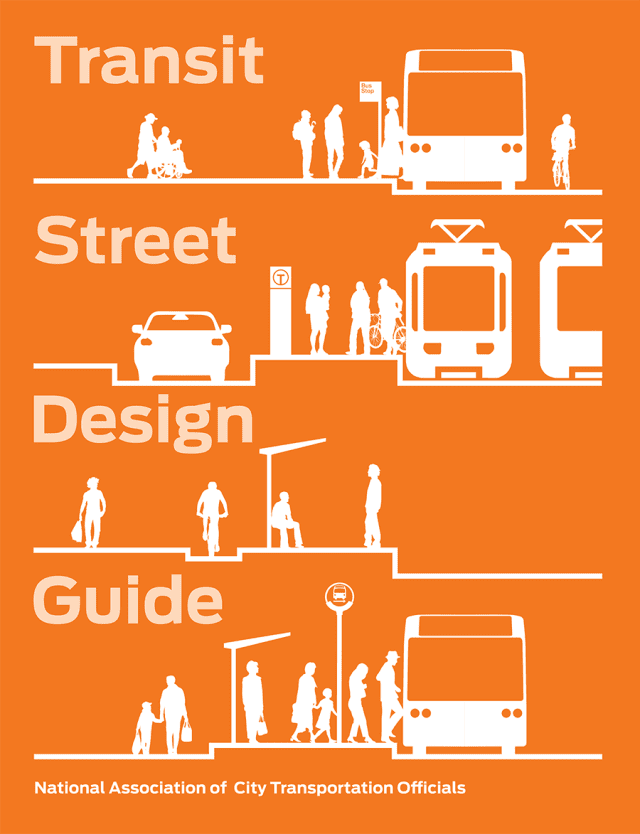 Transportation directors from North America’s largest cities have announced the release of a new design guide for building world-class transit streets—providing a framework for cities to grow without slowing down, while making city streets great places to be.

The Transit Street Design Guide, published by the National Association of City Transportation Officials (NACTO), is a blueprint for the future of mobility in cities. At a time when cities across the continent are experiencing rapid growth, transit is the key to unlocking street space and moving people to where they want, and need, to be.

While cities have been introducing high-quality transit to their streets at an accelerating pace, there was no comprehensive guide to incorporating safe, transit-first urban street design in the North American context. Developed by officials and practitioners from the 45 NACTO member cities, along with 18 participating transit agencies, the Transit Street Design Guidefills the gap, providing the tools to actively prioritize transit on the street. In developing the Guide, NACTO worked with TransitCenter, the American Public Transportation Association (APTA) and the Institute of Transportation Engineers (ITE), identifying projects and techniques worth replicating.

The Guide highlights transit as the centerpiece of transformative street projects, such as shared transit streets and transit boulevards, along with best-practice strategies—like all-door boarding and transit-friendly signals—that can speed up an entire system. In-depth guidance covers dedicated lanes and on-street transitways, boarding islands and other active-mode-friendly designs, as well as intersections and turn management. The Guide places these design techniques in a framework of transit network concepts like rapid service and grid networks, and provides comprehensive evaluation techniques to measure the entire street, going beyond conventional metrics.

“The NACTO Transit Street Design Guide is part of a movement of cities to put people and transit right where they belong, at the heart of city street design,” said Ed Reiskin, Director of the San Francisco Municipal Transportation Agency and NACTO President Emeritus. “It’s about a shift in mindset and recognizing priorities, from moving machines to moving people.”

“Cities thrive when we put people and transit first when designing our streets,” said David Bragdon, Executive Director of TransitCenter, which supported the development of the guide. “In this guide, transit agencies and city transportation departments have collaborated on new approaches to improving transit operations and the rider’s experience—and make our cities better places.”

“A truly sustainable transportation system means designing streets to promote transit,” said Darryl Young, Director of Sustainable Cities at the Summit Foundation, which also supported the development of the guide. “If you want to move to the next level, this guide will take you there.”

“ITE congratulates NACTO on the release of this important new publication,” said Paula Flores Benway, International President of the Institute of Transportation Engineers (ITE), which contributed to the Guide’s development. “With its strong focus on safety and mobility, the Guide is poised to advance the needs of communities of every size. We look forward to working with our members on its implementation.”

“Public transit customers want speed and reliability, but this goal can collide with desires for slow and intimate streets. Great streets can do both, and this guide shows how,” said Jarrett Walker, President and Principal Consultant of Jarrett Walker + Associates and author of Human Transit.

“We’ve seen in Houston that when we improve transit and integrate it into great streets we increase ridership and build neighborhoods,” said Christof Spieler, a member of the Board of Directors of METRO, the largest public transportation agency in Texas. “This guide will help us improve our riders’ everyday lives and create a better city for everyone.”

“Transit is by far the most efficient way to get people from Point A to Point B,” said Crissy Fanganello, Director of Transportation & Mobility for Denver Public Works. “With NACTO’s new toolkit, we can expand our work to bring 21st century solutions to Denver and keep our city and region moving.”

“We’re seeing a surge in demand for public transportation and for the facilities and amenities needed to make it safe and comfortable,” said Robin Hutcheson, Salt Lake City Transportation Director. “If you build it, they will come – and the NACTOTransit Street Design Guide will help us build more, and better, transit streets than ever before.”

“Seattle’s population is growing at an incredible rate. With our street network completely built out, reallocating space to transit is more important than ever before,” said Scott Kubly, Director of the Seattle Department of Transportation. “The NACTO Transit Street Design Guide will help plan for accommodating these tens of thousands of new residents in the walkable neighborhoods that they prefer.”

The Guide is a complement to NACTO’s influential Urban Bikeway Design Guide and Urban Street Design Guide, which have set the bar for successful 21st-century multi-modal streets. The guides can be endorsed or adopted by individual cities, counties, or states and provinces as either a stand-alone document or as a supplement to other roadway guidance documents.

The Transit Street Design Guide is available for purchase from Island Press (islandpress.org) and will soon be available as an interactive document at nacto.org.

Development of the Guide was supported by TransitCenter and The Summit Foundation, and was published in partnership with Island Press.

Comments are disabled
NEXT ARTICLE
Revit 2017 Advances BIM for Future of Designing Buildings
April 15, 2016
PREVIOUS ARTICLE
U.S. Department of Transportation Announces $20.5 Million to Improve Access to Transit in Communities Around the Country
April 15, 2016