Trap and Neutralize: A New Way to Clean Contaminated Groundwater 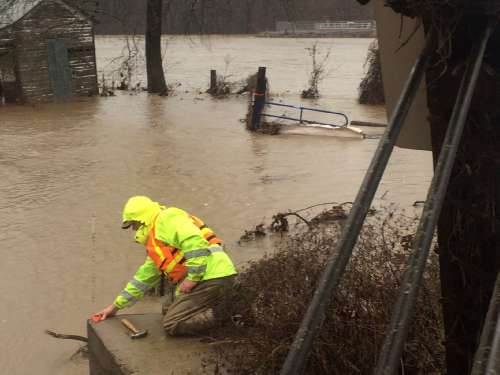 A team of researchers from Washington University in St. Louis have helped discover a new chemical method to immobilize uranium in contaminated groundwater, which could lead to more precise and successful water remediation efforts at former nuclear sites.

Researchers in the lab of Daniel Giammar, the Walter E. Browne Professor of Environmental Engineering in the School of Engineering & Applied Science, ran a series of experiments in a laboratory setting using water containing uranium — present in contaminated groundwater at various sites in the United States as a legacy of Cold War-era processing and waste disposal activities associated with nuclear materials production.

Calcium and phosphate work together chemically to immobilize uranium, which is shown to lead to increased cancer risk and liver damage in humans when ingested. Past field studies, including one at the Hanford Site in the state of Washington, focused on an in situ solution that injected phosphates directly into contaminated groundwater. Remediation efforts were not fully successful, because the scale of overlap for the calcium, uranium and phosphates was limited.

“A challenge with subsurface remediation is finding the right way to bring the necessary ingredients together in a poorly-mixed system,” Giammar said. “In the field-scale test, much of the added phosphate never reached the uranium because it precipitated out near the injection well. The solution is to figure out scenarios where it is possible to send the phosphate to where the uranium is, and other scenarios where the phosphate can be added to a location where the natural groundwater flow will bring the uranium into contact with it.”

The research was led by Giammar and Vrajesh S. Mehta, who earned his PhD at the School of Engineering & Applied Science. Other co-authors are Zheming Wang, senior researcher at the Environmental Molecular Science Laboratory in Richland, Wash.; Jeffrey G. Catalano, associate professor of earth and planetary sciences in Arts & Sciences at Washington University; and Fabien Maillot, former postdoctoral researcher in Catalano’s lab.

In three different types of experiments conducted in Giammar’s lab, the researchers first determined the exact level of calcium in the water. They were then able to add specific amounts of phosphate that formed calcium phosphate, chemically neutralizing and structurally incorporating the uranium. The exact combination of calcium and added phosphate rendered the uranium inert and trapped it in the groundwater.

Giammar’s lab will continue this research, with the goal of developing a technique to tailor the location of phosphate injection that would be used in conjunction with the groundwater’s existing calcium to remediate the uranium also present.

The research findings were recently published in the journal Environmental Science & Technology.