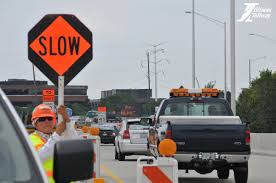 TOLEDO, Ohio – Deputy Federal Highway Administrator David Kim joined federal, state and local transportation officials, and highway safety advocates, today to kick off National Work Zone Awareness Week. The annual event coincides with the start of the 2016 highway construction season, and calls on drivers to be especially careful during warm-weather months when highway construction is at its peak.

In 2014, the most recent year for which data are available, 669 fatalities occurred in highway work zones – including 17 in Ohio where this year’s national kickoff event was held.

“While fatalities are about half of what they were 15 years ago, too many people are still dying in work zones,” said U.S. Transportation Secretary Anthony Foxx. “It’s up to you, me, and the rest of the driving public to keep workers and ourselves safe by slowing down and paying attention when behind the wheel.”

This year’s theme is “Don’t Be That Driver!” to remind drivers that work zones require them to stay alert and be prepared for sudden changes that distracted drivers may not notice in time to prevent a crash.

“We must do everything we can to keep highway workers, drivers, and vehicle passengers safe,” said Kim. “We’ve made good progress over the years but the slight increase in the most recent annual work zone fatalities tells us we still have much to do.”

Like the Federal Highway Administration (FHWA), the Federal Motor Carrier Safety Administration (FMCSA) works with other USDOT agencies to reduce work zone crashes through grants to states and research on driver behavior. FMCSA has made work zone safety a national priority in its commercial vehicle safety plans, and partners with the International Association of Chiefs of Police in its “Drive to Save Lives” campaign to encourage all law enforcement to stop trucks and buses when they are seen operating unsafely. The agency also urges all motorists to do their part by granting large commercial vehicles extra room to maneuver, to avoid lingering in blind spots, to avoid distracted driving and to make safety the number one priority at all times.

“Every car, truck and bus driver needs to be constantly focused on the road ahead, recognizing slowing traffic and approaching work zones,” said FMCSA Acting Administrator T.F. Scott Darling.  “For everyone’s safety, every driver must enter and proceed through roadway work zones with extra caution, carefully obeying signs and always maintaining a safe distance from the vehicle ahead.”

National Work Zone Awareness Week, sponsored each year by federal, state and local transportation officials, the American Traffic Safety Services Association and the American Association of State Highway and Transportation Officials at the start of construction season, raises awareness of safety measures taken on roads all over the country.

To support this effort, FHWA encourages everyone to wear orange on Wednesday, April 13 for a nationwide “Go Orange Day.”