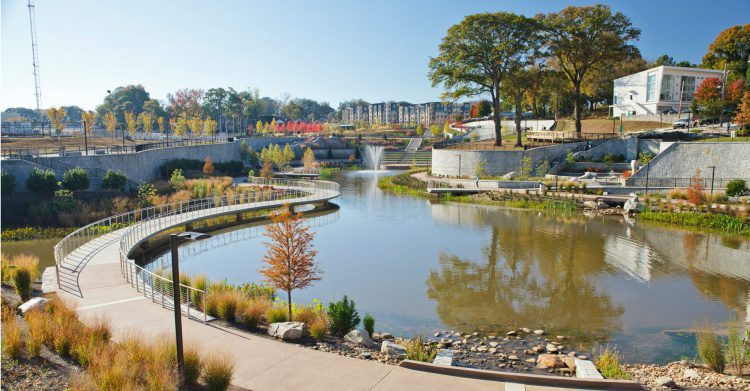 Direction for this project originated from conversations among citizens discussing local stormwater issues. As part of the development effort, the stormwater management was enhanced, from what was originally a series of underground pipes, into a community amenity. HDR worked closely with ABI, DWM, and the community to design a park that features a stormwater retention pond, while serving multiple purposes for the adjacent neighborhood.

The park, which is designed to provide much needed stormwater drainage relief within a 300-acre drainage basin, uses artistic elements to aerate and recycle pond water in a dramatic contrast to traditional discharge pipes. The stormwater pond serves as the park’s centerpiece, surrounded by walking trails, urban plazas, native plantings and an amphitheater. The project has generated adjacent development and revitalization, providing the cornerstone for a sustainable, high-density and high-quality urban transformation along with an outstanding design solution for a combined sewer overflow problem.

“Envision is beginning to influence projects in just the way that the Institute for Sustainable Infrastructure hoped,” said HDR Sustainability Director, Michaella Wittmann, LEED Fellow, ENV SP. “The Fourth Ward Park project started as a typical stormwater management/flooding problem, and turned into a solution that addressed the problem and resulted in economic and community development, environmental restoration and creation of a park. We’re proud that this project could meet high standards of sustainability while also improving community livability in Atlanta.”

Historic Fourth Ward Park has been a catalyst for development to be enjoyed by the residents of Atlanta for years to come. “We are very pleased that Historic Fourth Ward Park has received this recognition from the Institute for Sustainable Infrastructure,” stated Paul F. Morris, Atlanta BeltLine, Inc. president and CEO. “This transformative and innovative project has completely revitalized this community and it could not have happened without the support and partnership of Mayor Kasim Reed, the City of Atlanta Watershed Management and HDR, making the vision into reality.”

Envision is a fairly new verification process specifically designed to rate the sustainability of infrastructure and is similar to Leadership in Energy and Environmental Design (LEED®), which is used to certify buildings. The ISI Envision system measures sustainability in infrastructure projects in five categories: Quality of Life (QL), Leadership (LD), Natural World (NW), Resource Allocation (RA) and Climate and Risk (CR). These contribute to overall credits for the positive social, economic and environmental impacts in a community in the planning, design and construction of infrastructure projects.  Created in 2012 through collaboration between the ISI and the Zofnass Program for Sustainable Infrastructure at the Harvard University Graduate School of Design, Envision focuses on the impact of the infrastructure project as a whole.

“The Historic Fourth Ward Park project was recognized with an Envision Gold award for meeting multiple Envision criteria, including its contributions to the quality of life as part of the Atlanta BeltLine, and significant stakeholder involvement. Plus the idea originated with local citizens,” said ISI President and CEO Bill Bertera. “Resource conservation was designed into the project, including supplying 100 percent of the irrigation demand from the pond. The need for irrigation is also greatly reduced through the use of native plant materials,” said Bertera. “The pond’s capacity provides relief to the combined sewer, allowing the system to manage a rain event in excess of a 100-year storm.”

The Envision rating system categories with the highest scores for the Historic Fourth Ward Park project include:

Quality of Life (QL): Historic Fourth Ward Park restored an unusable parcel into a functional community park and provided stimulus for neighboring development. Following project completion, the influx of housing and retail has noticeably changed the economic and social condition of the community. Perhaps most notably is the benefit the project had to City Hall East (formerly the historic Sears, Roebuck & Co. building), an iconic building in Atlanta that had become dilapidated due to frequent flooding. Not only did the design of Historic Fourth Ward Park preserve views to this landmark, but also mitigated the flooding that had prevented its restoration. It has since been reborn as Ponce City Market, restoring its prominence as a vital landmark in Atlanta’s burgeoning Old Fourth Ward.

“While pushing the boundaries of traditional design, Historic Fourth Ward Park unifies the vision of Atlanta BeltLine, Inc., local residents, designers and city officials to provide a lasting legacy for an iconic neighborhood,” said HDR Project Manager Robert Bryant. “From the early stages of the project, collaboration on every level inspired the creation of a park that now provides a sustainable resource, spurs development and solves an engineering problem. It’s only fitting that the project scored highest in Envision’s Quality of Life category, demonstrating how visionary thinking can contribute to the physical, social and economic wellbeing of the community.”

Leadership:  ABI, The City of Atlanta and HDR, as the core team members, are all committed to improving sustainable performance. The project team deliberately took into account the relationships to and among other elements of community infrastructure, including physical and visual connectivity to adjacent properties. As part of the Atlanta BeltLine, the project adheres to its strategic principles, including “Emphasize the Multiple Connections of People and Places.” This principle was evident throughout the project planning and implementation.

“The Pond at Historic Fourth Ward Park represents the new approach the Department of Watershed Management is taking to maximize our infrastructure investments for environmental, economic and social sustainability,” said Jo Ann Macrina, Commissioner, City of Atlanta, Department of Watershed Management. “Instead of burying pipes and vaults underground, this engineered capacity-relief facility has become the centerpiece of a beautiful park. The success of this project sets the stage for green infrastructure projects in progress across our city.”

Resource Allocation (RA): The development of Historic Fourth Ward Park has created a positive impact to the quantity of stormwater runoff that is captured on site. Pre-development conditions allowed storm drainage from the connected watershed to discharge directly into the combined sewer. The park now captures and contains stormwater following rain events, and the water has been used to establish newly planted landscape – introducing biodiversity to the area.

About the City of Atlanta’s Department of Stormwater Management: Visitwww.atlantawatershed.org.

About HDR:  HDR has partnered with clients to shape communities and push the boundaries of what’s possible since 1917. We specialize in engineering, architecture, environmental and construction services. With nearly 10,000 employees in more than 225 locations around the world, we think global and act local. Learn more about our sustainability program atwww.hdrinc.com/about-hdr/sustainability.

About ISI Envision: Envision is the product of a joint collaboration between ISI, which was founded by three national engineering associations: American Society of Civil Engineers, American Council of Engineering Companies, and American Public Works Association, and the Zofnass Program for Sustainable Infrastructure at Harvard University Graduate School of Design. Information on all of ISI and Envision can be found on the ISI website, http://www.sustainableinfrastructure.org/.