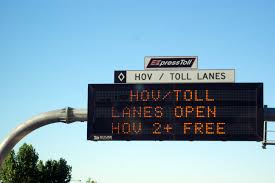 DENVER – The U.S. Department of Transportation’s Federal Highway Administrator Gregory Nadeau joined state and local officials today for the opening of the new North I-25 Express Lanes project in Colorado, a six-mile expansion of the High Occupancy Toll Lanes (HOT), which will give drivers more travel options and reduce traffic congestion.

“These new express lanes will help improve the quality of life for those living and working in the Denver area by giving them new options for beating rush-hour traffic,” said U.S. Transportation Secretary Anthony Foxx. “This innovative approach will also help commuters get to work safely and on time and support economic growth for the entire region.”

The $71.3 million project, which relied on $52.5 million in federal funds – including a $15 million Transportation Investment Generating Economic Recovery (TIGER) grant – expands the capacity of I-25, with an additional tolled express lane in each direction between US 36 and 120th Avenue that will reduce long-term operating and maintenance costs.

“Denver drivers have needed these extra options for quite some time,” said Federal Highway Administrator Gregory Nadeau. “Best of all, we’re keeping drivers safe and improving a key element to the Denver area’s freight economy.”

The new lanes will connect with the existing I-25 Express Lanes, which lead into and out of downtown Denver, giving drivers the option of carpooling or paying a toll to use the HOT lanes for a faster, more reliable commute or using the existing non-tolled lanes.

The new lanes will also offer more reliable and efficient transit service – buses now have the option to use the express lanes instead of congested lanes. The new lanes are also expected to reduce fuel consumption by as much as 10 million gallons and greenhouse gas emissions by nearly 90,000 metric tons due to reduced vehicle delay and idling over 10-year period.