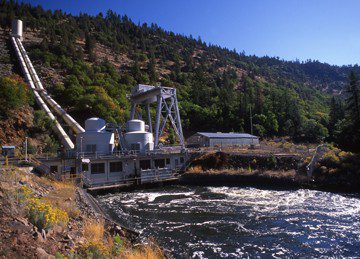 SALEM, Ore. — The States of Oregon and California, PacifiCorp and the federal government – through the U.S. Departments of the Interior and Commerce – announced an agreement-in-principle to move forward with amending the Klamath Hydroelectric Settlement Agreement (KHSA).

Under the agreement in principle, the parties to the KHSA will pursue its implementation through the administrative process governed by the Federal Energy Regulatory Commission (FERC), using existing funding and on the same timeline. Members of the California and Oregon delegations introduced legislation in the past two Congresses to advance the hard-fought KHSA and two related Klamath agreements; however, the U.S. Congress adjourned last year without acting on legislation to authorize them.

Though the agreement-in-principle focuses primarily on the dam removal portion of the broader pact, it states that the move is an important and necessary first step toward maintaining the broader Klamath settlements. The states and the U.S. are actively working with all Klamath Basin stakeholders – Members of Congress, tribes, farmers and others – on a comprehensive resolution to restore the basin, advance the recovery of its fisheries, uphold trust responsibilities to the Tribes, and sustain the region’s farming and ranching heritage.

The agreement-in-principle states the four parties intend to work with each other and the more than 40 signatories to the KHSA in the coming weeks to develop terms of an amendment to the KHSA to implement its key provisions, including providing for facilities removal. The target date for signing an amended KHSA is February 29.

The KHSA as amended would then be submitted for consideration through FERC’s established processes, which involve public comment. If approved, PacifiCorp would transfer title of the Klamath River dams to a non-federal entity that would assume liability and take the appropriate steps to decommission and remove the dams in 2020.

“The Klamath agreements were the culmination of years of hard work and collaboration across a diverse and committed coalition of parties – and we can’t let that local vision go unfulfilled,” said Secretary of the Interior Sally Jewell. “This agreement-in-principle is an important initial step as we work toward a comprehensive set of actions to advance the long term progress and sustainability for tribes, fisheries and water users across the Klamath Basin.”

“The Agreement in Principle continues the momentum built by those who crafted the original Klamath Agreements,” said Kathryn Sullivan, Ph.D., assistant secretary of commerce for oceans and atmosphere and NOAA administrator. “NOAA considers this the first step along a new path to secure the future of irrigated agriculture and tribal communities, and the fishery. We’ll continue to work in close coordination with all the KBRA parties on a comprehensive plan. Too many people have worked too long to let this historical opportunity slip away.”

“Oregon is moving forward in the Klamath Basin. We can’t afford to sit back and wait for another crisis to batter these communities,” said Oregon Governor Kate Brown. “Congressman Walden took a step forward by drafting legislation late last year, and today’s action is part of a broader movement to work with him and others to get the Klamath Basin agreements back on track.”

“This agreement marks an unprecedented coming together of parties to seek solutions to difficult problems,” said California Secretary for Natural Resources John Laird. “California is committed to the implementation of the Klamath Hydroelectric Settlement Agreement and to continued efforts to achieve a broad settlement of the issues that have plagued the Klamath Basin. This is an important first step toward both of those goals.”

“The certainty and protections provided by the Klamath settlement offer a fair way forward for our customers in Oregon, California and beyond,” said Stefan Bird, president and CEO of Pacific Power, a division of PacifiCorp. “PacifiCorp is committed to continuing to work with our partners in the coming weeks and months to advance this important agreement.”

The four PacifiCorp dams on the Klamath River are authorized for hydroelectric power generation. Regulations require that the dams need to be retrofitted to provide fish passage for salmon, steelhead and other fish. The Oregon and California public utility commissions found that the original KHSA was a prudent alternative for PacifiCorp’s customers.