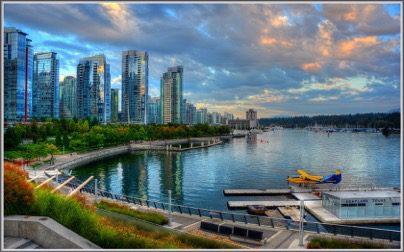 The importance of ‘living green’ was brought to the attention of sixteen countries at an International Green City Conference this month.

Becoming the greenest city in the world, using plants to manage stormwater threats, how to implement greening and change the public mindset, how buildings need to be able to ‘heal people and the benefits of a ‘Green City’, were all on the agenda.

Organised by the International Association of Horticultural Producers (AIPH) and the Canadian Nursery Landscape Association (CNLA) the event was held in Vancouver, Canada on 14-18 March. Sponsored by TD and Davey Trees, it attracted delegates who are committed to greening city landscapes.

Vancouver is working towards being the greenest city in the world by 2020. The former Mayor of Vancouver and Premier of British Columbia, Mike Harcourt, opened the conference by demonstrating that Vancouver has had an environmental focus since the 1980s when back then they were already looking at alternatives to cars and different energy sources as well as planning the city to be more sustainable. For a long time it has been a philosophy of Vancouver that there is a close link between greening the city, economic sustainability and livability.

Vancouver Urban Forest Strategy which has a target of achieving 22% tree coverage in the city by 2050 was introduced by Bill Stephen from the City of Vancouver. In a densely populated city this is a big challenge as growing space has reduced with city development, but initiatives such as ‘Street tree cooling networks’, the ‘citizen forester’ and planting 150,000 trees by 2020 will all help in reaching the goal.

Local examples of green city projects were provided from the University of British Columbia, including the East Clayton Neighbourhood Project, introduced by Patrick Condon and Sara Barron, and how plants have been used to manage stormwater threats presented by Daniel Roehr.

A ‘Living Garden’ concept, integrating plants with water and biodiversity, along with other practical examples of how to implement greening and change the public mindset towards the subject was discussed by Egbert Roozen, Director of the Dutch Landscape and Garden Contractors Association from The Netherlands.

A powerful case for ‘living buildings’ and ‘living green infrastructure’ and how buildings need to be able to ‘heal people’ was given by Steven Peck, President of Green Roofs for Healthy Cities. His organisation is aiming to secure one billion square feet of green roofs in North America by 2022.

Many cities across China have invested billions of dollars in becoming greener at a scale that vastly exceeds other countries. Professor Li Xiong, Dean of the School of Landscape Architecture at Beijing Forestry University, China, has been closely involved in developing the standards for Chinese Garden Cities. The standard for garden cities is tough and implemented firmly, but the social, environmental, health and economic benefits in China’s Garden Cities are plain to see.

Examples of cities around the world that have used an International Horticultural Exhibition to stimulate city greening, were presented by Karen Tambayong from Indonesia who is Chair of the AIPH Green City Committee. Such exhibitions are a great way for any city to distinguish itself as green and reap much broader benefits too.

Summarising his thoughts on the conference, the chairman, Bill Hardy, commented, “I am delighted that this event has been so successful. We have brought together a truly international audience to debate these critical issues for the future of our cities. We want this conference to be a part of the process of getting more cities to embrace living green. I was pleased that we could also tour the best green examples around the city and that Vancouver can provide real inspiration for cities everywhere.”

AIPH Secretary General, Tim Briercliffe commented, “In an increasingly urbanised world the importance of city greening just keeps getting bigger. The intelligent use of plants in the urban landscape can address so many problems that cities face and this conference has illustrated that so well. We will continue our work to promote the benefits of city greening as we prepare for the next AIPH International Green City conference which will take place in Antalya, Turkey in September this year.”

Since 1948, AIPH has united horticultural producers in an international community that thrives to this day. Much has changed in that time. Technologies advanced, cities rose from the ground, and we have become more connected than ever. As a result, our essential bond with nature has been weakened. AIPH strives to reignite and uphold an appreciation of plants that we believe is a basic human instinct. We support the work of grower associations globally and together we champion a prosperous industry, growing plants that enhance lives, advance societies and sustain our planet, for this generation and the next.