Trimble Gets Introduced to the SketchUp Community at the 3D Basecamp 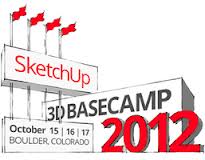 The fourth SketchUp 3D Basecamp started today in Boulder, Colo., and runs through Wednesday. The event has roughly 280 attendees who are power users of the tool, as well as developers that extend functionality with various add-on features. John Bacus, product management director for SketchUp, introduced the event with the affirmation of the ongoing vision to provide 3D for everyone. With this their first public event since the Trimble acquisition, many were there to question the road forward and hopefully receive assurances that their business plans were intact.

SketchUp has achieved a great deal of adoption across broad communities with more than 30 million unique activations, and they believe that the flexibility of the platform is the primary reason for this growth, along with keeping the tool as simple as possible.

Trimble is new to this community, and Bryn Fosburgh, senior vice president at Trimble took to the stage to discuss the acquisition. Sharing some background, Bryn told the story of how Trimble came about in 1978 when the founder, who was working on GPS for HP Labs, was let go when HP decided to no longer support the research. Charlie Trimble bought the patent, and started Trimble above an old Los Altos theater in California. Today, Trimble is a $2B global company that has done 66 acquisitions in the last 12 years, with 33 offices throughout the world, and is publicly traded on the NASDAQ (TRMB) market. Trimble has more software developers today than hardware developers, and has an aggressive forward-looking vision for the markets it serves.

Trimble is in five major markets that include agriculture, land demarcation (property surveying and mapping), transportation logistics, building and construction, and heavy civil. Bryn is responsible for the two construction markets, and he engineered the acquisition. He shared that while Trimble has design tools for Mechanical/Electrical/Plumbing (MEP), structural, and civil engineering, it has no tools for architecture. The vision is to go from concept to construction, with the idea of a lean construction process that’s similar to the revolution that has taken place in manufacturing. Trimble also has designs to centralize tools on SketchUp as a platform to develop solutions for its various markets.

To allay some fears, Fosburgh indicated that there will always be:

At this point in the program, Bacus came back to the stage to discuss recent developments and plans, and share the SketchUp team’s excitement at becoming part of Trimble. The first item was the discussion of a new regular release cycle with plans for a yearly release that will debut first with SketchUp 2013.

3D Warehouse is one of the things acquired by Trimble, but it’s still being managed by Google as it will take time to transition the cloud-based infrastructure and to port over to the new owners. Development will continue with this repository for model exchange, and Trimble looks at this as a key piece to increase collaboration. In fact, internally 3D Warehouse is being referred to as the Content Warehouse, which gives some indication of where that will evolve in the future.

SketchUp is increasingly being looked at as a platform to extend functionality to new users. According to user metrics, 45% of SketchUp Pro users have at least one plug-in installed, which is a big vote for the Ruby developers in the audience. SketchUp will address some chaos that they’ve created there, with plans to provide better development tools, participate in some Open Source efforts, and assist developers by creating tools that allow users to more readily discover plugins and scripts. A new Developer Console was released today, implemented in Ruby/Javascript. SketchUp also has added a TestUp capability to developers to test their code that’s the same environment that SketchUp developers use to test future features. They’ve also just participated in a code sharing project with an open source STL importer/exporter that solves a major pain point of the 3D printing community. That tool and code is now up on GitHub under the Apache license.

Among the interesting threads from the Q&A session that wrapped the morning were discussions of 3D point clouds, the extensibility of the tools for developers to build businesses on the platform, the integration of tools with construction workflows, and the idea of smart 3D components that know what they are as well as knowing their own properties. Each of these areas were affirmed on the radar and of interest in their development plans. LIDAR is of particular interest, given that Trimble is one of the leading manufacturers of LIDAR scanners.

The rest of the day centered on partner tools that included a panel of different rendering tools and engines that polish the output and great photorealistic effects to the standard SketchUp output. A session on some of the cutting edge development being done included a cloud-based sharing environment (https://sunglass.io/), a product that adds 4D visualization and planning (www.4dvirtualbuilder.com) and a repository for different product catalogs to be integrated into models along with cost details and specs (http://igloostudios.com).

The culminating keynote was given by Bre Pettis, founder of Makerbot, and a big SketchUp fan. Makerbot has just come out with their next-generation 3D printer that has generated a lot of buzz, including a cover spot for Pettis on the latest issue of Wired magazine. Pettis shared the background of his company’s impressive growth, and his excitement that it’s now the designer’s time to shine.

At the end of the first day, there was good buzz and excitement about the new ownership under Trimble. The next two days of the event include an unconference discussion forum tomorrow, and a Dev Conference and design charrette with awards and prizes.