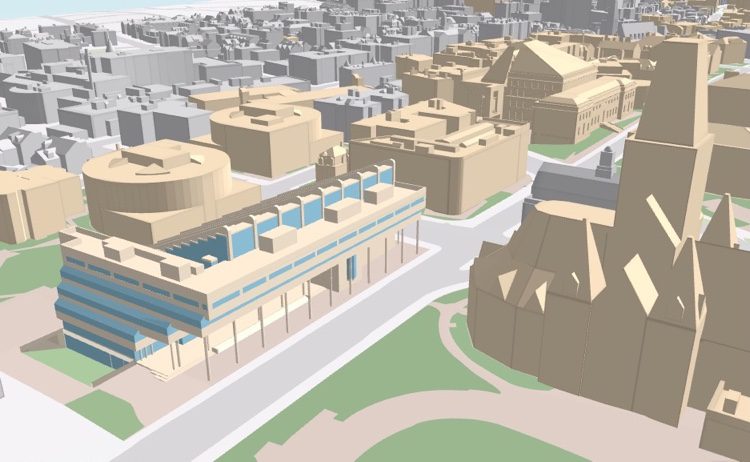 Mapping and Modeling Facilities and Classrooms

Institutions of higher learning are working on detailed maps and models of their facilities and campus infrastructure. Although maps and models already exist, there are whole new means to capture 3D data and visualize a model as well as display other campus metrics such as real-time information captured by sensors. The advancement and simplification of the hardware and software makes the technology accessible and affordable.

Harvard Planning and Project Management (HPPM) successfully uses mapping that documents the 600-acre main campus including Cambridge, Allston and Longwood Medical Area in Boston. In total, there are over 660 buildings for 21,000 students and an additional 16,000 faculty and staff.

HPPM has a long-established enterprise GIS system and recently extended this mapping data online with an interactive 3D map. Moving to 3D helps visitors navigate the campus in a more-intuitive manner, and the department now is looking to the future, trying to figure out how it might present and share more-immersive 3D information as well as dynamic information related to current conditions.

The foundation of a spatially enabled campus is the integration of the GIS, space system, and facility- and asset-management systems, according to a paper entitled “Campuses Need to be Fully Spatially Enabled” by Jim Nelson, director of Planning Resources at HPPM that was delivered at the Advancing the Spatially Enabled Smart Campus specialist meeting at the University of California, Santa Barbara in Dec. 2013. The integration and shared spatial content then enables floor plans and other spatial detail to be registered along with human resources, transportation and safety systems.

With an integrated system that can display incoming information from sensors that understand the presence or absence of individuals, the planning, design, daily operations, emergency response and ongoing maintenance of the entire campus can be informed with use patterns. With an eye to privacy, the individual user would have an accurate determination of his or her own location inside buildings and outside, while presence and location detail would remain anonymous.

Benefits of indoor and outdoor modeling and presence sensing include the following: 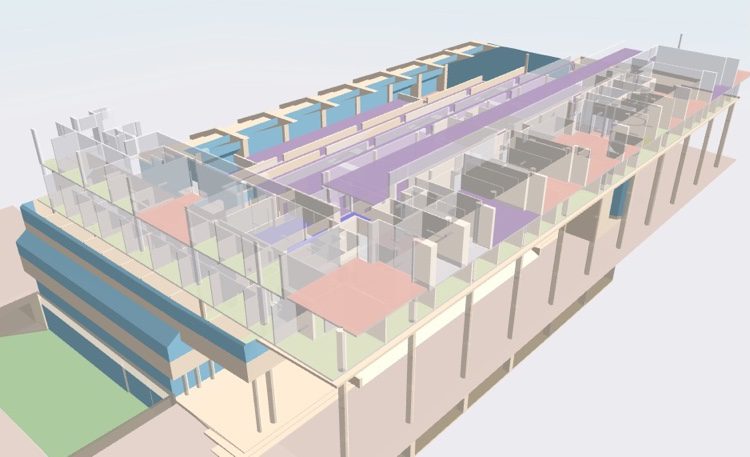 The 3D map is a next-level capability that provides a new means for campus navigation that can be presented on handheld devices, but HPPM hopes to offer more. In addition to the 3D model of the campus, HPPM captured floorplans and other indoor location information, and it wants to make those data accessible as well.

“I was able to get permission for a prototype to use all the floor plans and put them into the buildings,” says Parvaneh Kossari, GIS manager at HPPM. “The next step is to develop an elegant and efficient workflow for data collection and presentation to share spatial data with others.”

Although HPPM has been working to import 3D CAD models into its geodatabase, these highly detailed models get large, and they aren’t feasible for streaming at the campus scale. Instead, HPPM had the high-resolution aerial imagery that’s collected campuswide every other year converted into lightweight 3D models that were then fine-tuned for presentation.

“We’ve been talking about how important it is to go inside our buildings and various campus spaces and to enable indoor navigation,” says Kossari.

The department received the push it needed to pilot new indoor-mapping capabilities when the once-yearly campuswide symposium, Harvard Learning Spaces Week, requested a map that included Harvard’s best teaching and learning spaces on campus in 3D.

“Our planning are really interested in an interactive map of classroom configurations, capacity, functions and resource allocation,” says Kossari. “For Harvard Police, the model would help for public safety and emergency planning.”

“We’re working to set the foundation for a three-dimensional and interactive map that can be used and built upon for a long period of time,” says Jan Halatsch, co-founder and chief product officer at SmarterBetterCities. “Ultimately, we want our customers to just upload their existing 3D models, and automatically optimize the geometry and georeference the data.”

Graphic look and feel is an important aspect of a long-lasting platform, as users need to recognize their surroundings. An accurate model also is critical to have value across multiple operational use cases.

The use of beacons is a trusted indoor location technology that can enable seamless indoor navigation and the sharing of interior details. However, using this technology may raise privacy concerns that need to be addressed, with permission needed from faculty and students. Sharing the interior floor plans also raises security concerns.

“Having permission of all the stakeholders will take time,” says Kossari.
Although indoor navigation is seen as important, student use for wayfinding isn’t the top priority.

“I see indoor navigation as critical for use cases such as evacuation and emergency routing,” notes Halatsch. “For daily use by students, they made it to university, so they should be able to find a room if they have a 3D model.” 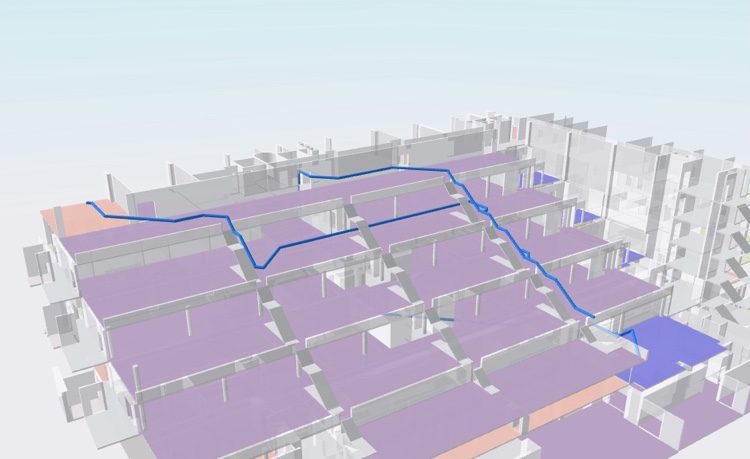 Although beacon-based navigation of interior campus spaces with GPS-like wayfinding is of interest to guide students and visitors through complex campus interiors, the most compelling application is emergency evacuation.

Extending to Daily Use

The ideal delivery of this information for daily use is a mobile application that allows the seamless navigation of outdoor and indoor space, with details on interior access points, room locations and navigation details for getting from one building to the next.

Many technology developments are aiding the quick advancement of indoor mapping. The sensors and platforms for the Internet of Things are advancing, with many different applications for 3D interactions starting to come online.

“Data interoperability has been a big enabler to combine GIS, CAD and other data,” notes Halatsch. “All the data we gather through wireless networks and camera systems for campus monitoring and indoor tracking is evolving and getting better, with APIs that help to disseminate the 3D content across different content networks.”

To expand from a building to a campus and then city scale, 3D modeling needs to become quick and easy, where replacing a file and updating a scene takes little time and effort.

Navigate the CloudCities Harvard map in this embedded viewer.

The Ohio State University began its transition from 2D AutoCAD files to 3D Autodesk Revit models on a project to capture the 54 buildings and more than 6 million square feet of its Wexner Medical Center. The project’s ambitious size provided a foundation that has been scaled to the more than 570 buildings on the main campus as well as regional campuses.

“We have captured more than 18 million square feet of buildings in BIM, which is a little more than half our campus,” says Joe Porostosky, director, Facilities Information and Technology Services at The Ohio State University. “Everything that we currently have in 2D AutoCAD is being modeled in Autodesk Revit. When we’re done with the project, we will have around 35 million square feet modeled.”

Implementation of this conversion process started with a full year of planning, workflow discussions and creation of detailed standards. In addition, Revit templates were created, and a step-by-step process was implemented to move from 2D plans to 3D models. This also involved the development of training materials so the process could be taught to the implementation team.

“We hire students year round to build the models,” says Porostosky. “They get trained in the beginning of the summer, and they work for us for a year or longer. The majority is a manual process that starts with a CAD file, record documents, field-verification measurements and a lot of photos.”

The exterior of buildings are modeled with textures and a high level of detail.

“The models we’ve built are primarily architectural and are great for planning purposes, but they don’t have ducts, air handlers and pumps, as there’s no way we could do that for all existing buildings from labor and data-handling perspectives,” notes Porostosky. “We require Revit models on all new large projects (over $4 million), and we’re starting to get a lot of great details that we can use for operations.”

The architectural models prove effective for energy modeling and other sustainability functions. The team now is looking to leverage some of its more-detailed models and combine them with meter data and other sensors to understand how the buildings are using energy.

“We are working on a prototype to show the value of smart buildings,” adds Porostosky. “Then we can talk about next steps to manage our facilities effectively.” 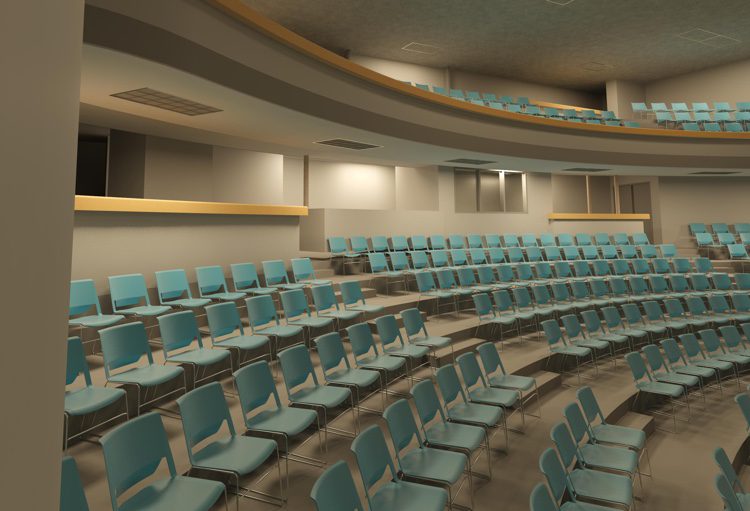 Interiors include lighting and other atmospheric information to aid in space planning.

Students working on the model come from architecture, interior design, landscape architecture and civil engineering programs. Engineering staff have engaged and are using the department’s laser scanner to collect even more-detailed 3D models. Other departments have expressed interest in BIM training and utilizing the detailed model for coursework, but there isn’t a lot of momentum for that to date.

“My team is working mostly on setting a foundation for future uses,” says Porostosky. “Little by little, we are informing people about BIM and the ability to know things about our buildings that we didn’t know before. Most importantly, the overall model and individual building models will help on future projects.”