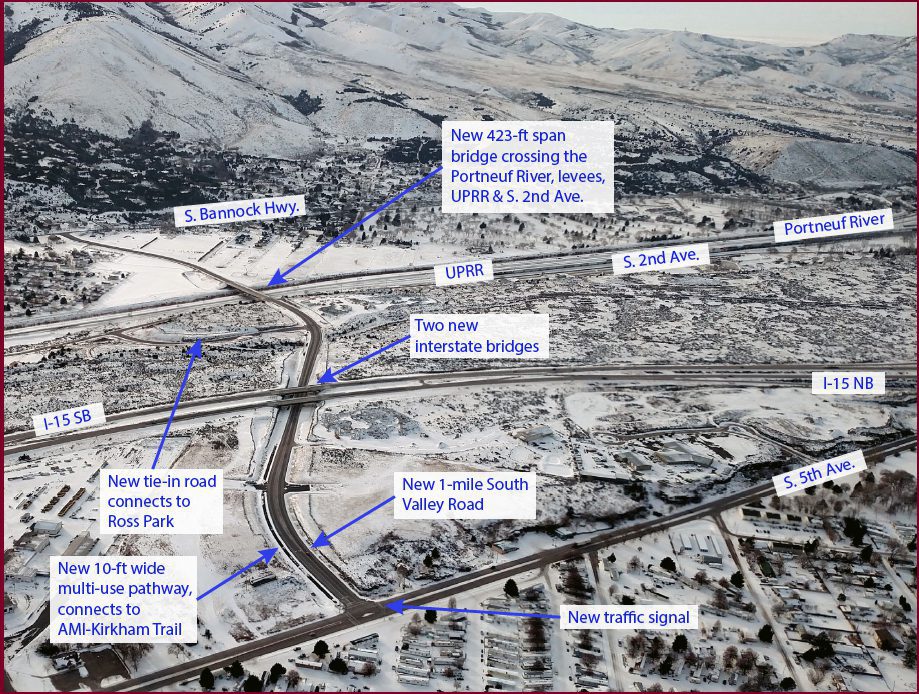 The long-awaited South Valley Connector project in Pocatello was named the 2016 Project of the Year March 21 by the Rocky Mountain chapter of the American Public Works Association (APWA). The Idaho Transportatin Department served as the resident engineer on this local project for the city of Pocatello.

First envisioned in the summer of 1968, the project to create a new connection to the south valley area of Pocatello finally opened to the public as South Valley Road just two days before Christmas 2015. The APWA Awards Banquet will be held April 20 in Cheyenne, Wyoming.

The South Valley Connector project is a one-mile long route connecting Bannock Highway to South 5th Avenue. From Bannock Highway in the west, the roadway begins on an elevated plain across a former floodplain and sewage lagoon, traveling east until it reaches the Portneuf River levee. There the alignment switches to a 423-foot, two-span bridge crossing the Portneuf and associated levees, six Union Pacific Railroad tracks and South 2nd Avenue, finally touching down on a basalt lava flow outcropping.

Once located on the bluff overlooking the valley, the roadway profile crosses beneath the existing Interstate 15 with two overpass bridges. The roadway then resurfaces and connects to South 5th Avenue at a new traffic signal one-half mile south of the nearest I-15 interchange. The roadway consists of two travel lanes, bicycle lanes, and a 10-foot wide multi-use pathway separated from the road. Additional right-of-way was purchased for future widening.