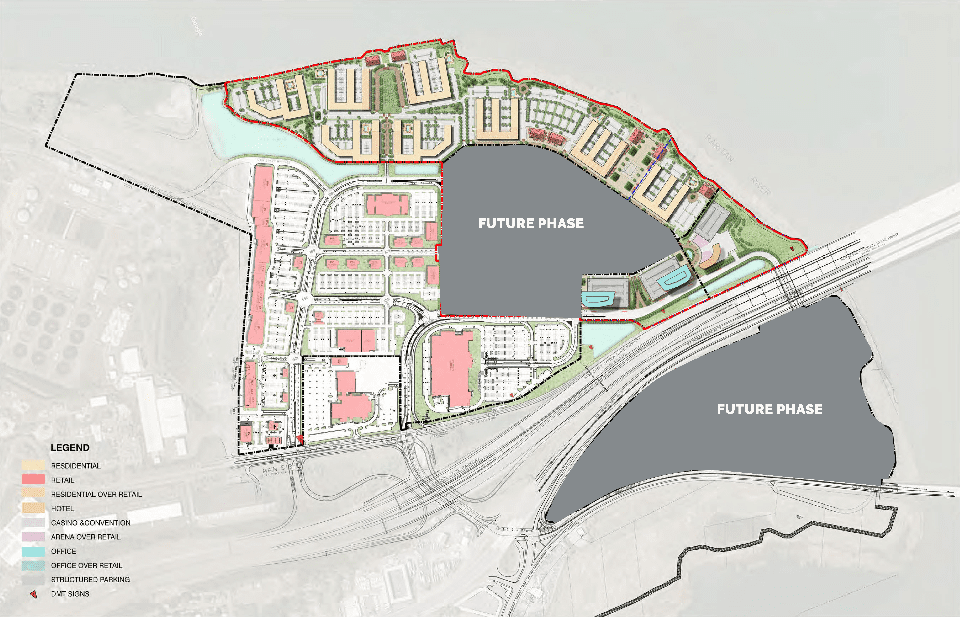 KING OF PRUSSIA, Pa.—O’Neill Properties Group (OPG) announced that it has completed brownfield remediation at the notorious 40-acre lagoon at The Pointe, the anxiously awaited $2.2 billion project in Sayreville, NJ. The Pointe is the largest mixed-use brownfield redevelopment ever undertaken in the Northeast. Vertical construction will commence in spring 2016 on anchor tenant Bass Pro Shops Outdoor World, which will open a 200,000-square-foot mega outdoor sporting goods store, the largest Bass Pro in the country outside of its original flagship operation.

When the 440-acre site was purchased in 2008, OPG committed to cleaning up the massive brownfield contamination. One of the most noticeable areas where remediation work took place was at the location of the new Bass Pro Shops, where a 40-acre lagoon sat filled with titanium dioxide waste byproducts from the former on-site National Lead manufacturing facility. The lagoon, with its highly-acidic, yolk-like substance and changing colors, was an infamous landmark in the region. Challenged with a unique chemical composition, OPG enlisted the help of engineering firm Maser Consulting to undertake what quickly became the largest, and most intensive chemically contaminated site remediation project in the country.

“After years of behind-the-scenes work and what was truly a remediation engineering marvel, 2016 is going to see a flurry of leasing and construction activity to really kick off this monumental project,” said Brian O’Neill Jr., COO of O’Neill Properties Group and Development Manager for The Pointe. “The Pointe at Sayreville will redefine shopping, entertainment, and dining, transforming the local economy by creating nearly 10,000 new jobs and serving as an exciting new destination for the 12 million people in the New Jersey/New York marketplace.”

O’Neill’s general contractor, MLP Builders, worked with Maser Consulting to design an in situ stabilization, which improves and stabilizes soil content while also removing chemical contaminants. The process required 38,000 tons of Portland cement powder to be imported, mixed, and then injected into the lagoon to stabilize the material over the course of a year. In addition to the mixing and injections, thousands of tons of toxic contamination were removed from the site and properly disposed of in accordance with US Environmental Protection Agency regulations. Once complete, the lagoon was then drained. OPG then constructed a massive 205,000-square-foot compacted pad made of recycled material dredged from the New York Harbor and under the Tappan Zee Bridge. The cost for the remediation project was $8 million, with the cost to construct the pad that is to be the base of Bass Pro Shops costing an additional $3 million.

“The innovative use of in situ stabilization (ISS) saved millions of dollars,” said Dan Busch, PE, PP, CME, Principal at Maser Consulting. “Our geotechnical team worked tirelessly in challenging conditions and timeframes to verify the performance of the mixing, performing more than 4,500 tests to confirm the ISS met the design criteria and create a safe, hazard-free site for this seminal Bass Pro Shop store.”

The Pointe is located at one of the busiest intersections in the United States – the Garden State Parkway, Route 9, and Route 35. More than 400,000 cars pass The Pointe every day, with that traffic spiking to more than 1 million cars per day as vacationers head to the Jersey Shore in the summer months.

725,000 square feet of retail is currently being pre-leased by Ripco Real Estate, the Tri-State area’s premier retail real estate brokerage firm. “The Pointe will become an iconic destination for consumers in the region and represents the perfect marriage of population density, access, and retail,” said Todd Cooper, co-founder of Ripco.