/ Analysis / Analyzing the Risks and Effects of Rising Sea Levels in Norfolk, Va.

Analyzing the Risks and Effects of Rising Sea Levels in Norfolk, Va. 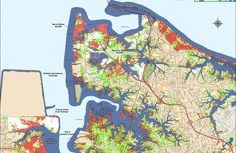 In Norfolk, Virginia, an East Coast city that’s home to the world’s largest naval station and important seaports, catastrophic flooding could damage more than homes and roads. A new study from Sandia National Laboratories assesses how much the city, its region and the nation would suffer in damages to national assets and lost economic activity if it does nothing to address rising sea levels.
Map

In partnership with the City of Norfolk’s Resilience Office and 100 Resilient Cities (100RC), pioneered by The Rockefeller Foundation, Sandia analyzed the risk to important assets, quantified their value and helped Norfolk prioritize the most effective ways to stay resilient in a natural or manmade disaster.

Sandia created an Urban Resilience Analysis Process to help reframe the conversation in Norfolk regarding flooding and demonstrate how the long-term benefits of mitigation outweigh the short-term costs associated with it, systems scientist Robert Jeffers said. The city and region are now taking new approaches to handle the resilience challenges posed by rising tides and water management.

The process, now available to other cities, is a holistic framework. It includes key elements of Sandia’s critical infrastructure modeling and simulation tools, risk consequence assessment and systems analysis expertise to show cities the most effective investments they can make to become more resilient, Jeffers said. The report also shows individual cities how their resiliency affects other cities in their region, the nation and the world, he added.

Sandia’s report, “Development of an Urban Resilience Analysis Framework with Application to Norfolk, VA,” is available to the public on Sandia’s 100 Resilient Cities website, which also contains information about ways Sandia can help improve resiliency.

To prove the analysis process works, Sandia analyzed Norfolk’s vulnerabilities in the face of a nor’easter, a storm that blows in from the northeast and brings severe coastal flooding, erosion and hurricane-force wind, along with economic damage. The work was done in partnership with 100RC, which currently works with a global network of 67 cities to better prepare communities like Norfolk to withstand natural or manmade disasters, recover more quickly and emerge stronger.

“Sandia Labs provided Norfolk with an invaluable level of expertise and technical support through this partnership. The systems analysis they produced gave the city new data and insights into the value and interdependencies of its economy, as well as the relative strengths and vulnerabilities of its infrastructure,” said Amy Armstrong, director of city relationships for 100RC. “This data and analysis will be crucial in Norfolk’s future planning efforts, and it is my hope other cities in the 100RC network are also able to take advantage of this sophisticated analysis to help make them more resilient to the inevitable shocks and stresses they will face.”

Since 2001, Sandia conducted consequence analyses at a national scale at the Department of Homeland Security’s National Infrastructure Simulation and Analysis Center (NISAC), jointly housed at Sandia and Los Alamos national laboratories. DHS created NISAC to assess the impacts of a variety of threats to the nation’s critical infrastructures. The research foundation built by NISAC made it possible for Sandia to build its detailed analysis of Norfolk’s infrastructure, Jeffers said.

“Recently, a lot of people have come to the realization that cities are where the rubber meets the road,” said manager Eric Vugrin, who leads Sandia’s 100RC work. “It’s the cities that have the governance and operational responsibility to get things done.”

In the first step of the Urban Resilience Analysis Process, Sandia experts work with city personnel, utility and industrial representatives and emergency planners to identify potential disasters and infrastructure that’s critical to the city. That initial step will inform later decisions about investment priorities, Vugrin said.

Then decision-makers identify acute and chronic problems for the city and develop resilience metrics to measure the effectiveness of different solutions. In Norfolk’s case, Sandia estimated direct economic losses to local businesses and indirect losses to local, national and international businesses.

While such analyses would take into account multiple scenarios and infrastructures, Sandia’s report was limited in scope to show what such a process can do for cities. Sandia looked at four critical infrastructures — electrical power, telecommunications, transportation and its fuels — and the economic damage that would result from disrupted services in Norfolk and the region.

Sandia researched the effects of a 100-year flood in three scenarios of net rising sea levels of 0, 1.5 and 3 feet and created maps at a resolution of 10.9 yards (10 meters) to show how far inland floodwater would reach. Experts then overlaid electrical substations, roadways, telecommunications centers and fuel infrastructure to show the flood’s impact, Jeffers said.

The analysis focused on Naval Station Norfolk; the Norfolk International Terminal, one of the nation’s busiest ports; and Lambert’s Point Pier 6 Coal Terminal, the largest and fastest coal transport facility in the northern hemisphere. Pier 6 and two other coal terminals in the region account for about 40 percent of all coal exports from the U.S. and about 70 percent of coal shipping capacity on the eastern seaboard, Jeffers said.

Norfolk is “critical to coal transportation nationally and globally, particularly for coal blended for metallurgical uses, such as steel production,” Jeffers said.

By providing cities like Norfolk with data to quantify their national and global importance, Sandia helps them build their cases for obtaining funding to pay for infrastructure investments, Vugrin said.

The Regional Economic Accounting Tool developed by Sandia found that regional direct and indirect economic impacts in the four days following a flood would range from $354 million to $606 million, depending on which of the three scenarios the model used, according to the report. Indirect economic impacts might include disruptions to the regional supply chain or losses to businesses dependent on infrastructure and related businesses suffering flood damage.

“The city itself might not be able to afford all the flood mitigation they require, but if you look at the national security and national economic implications, the performance of the city of Norfolk is important and there may be national incentives to help them build resilience into their city,” Vugrin said.

Norfolk Chief Resilience Officer Christine Morris added: “The opportunity to work with the experts at Sandia on the development of an Urban Resilience Analysis framework provided the city of Norfolk with an incredible opportunity to better understand how to prioritize investments. Giving cities access to world-class analytical talent like Sandia is exactly what is needed to build resilient cities.”

While Norfolk’s report was limited in scope to show how the concept worked, such analyses can be applied to any disaster, for example, earthquakes, hurricanes, tornadoes, cyberattacks, power outages or terrorist attacks. And, cities can choose to analyze any number of critical infrastructures or solutions, the researchers said.

Eventually, Norfolk can determine the most cost-effective investments by plugging in a variety of solutions or combinations of solutions into the model, which will simulate the economic outcome of each choice, Jeffers said.

With more research and development, Sandia aims to improve the analysis tool and make it more user-friendly for cities, Vugrin said.

“City planners don’t have time to learn the sophisticated mathematical models in the tool,” he explained, “so Sandia is asking how we get to the point where we can simplify this framework and hand it over to the cities for their use.”