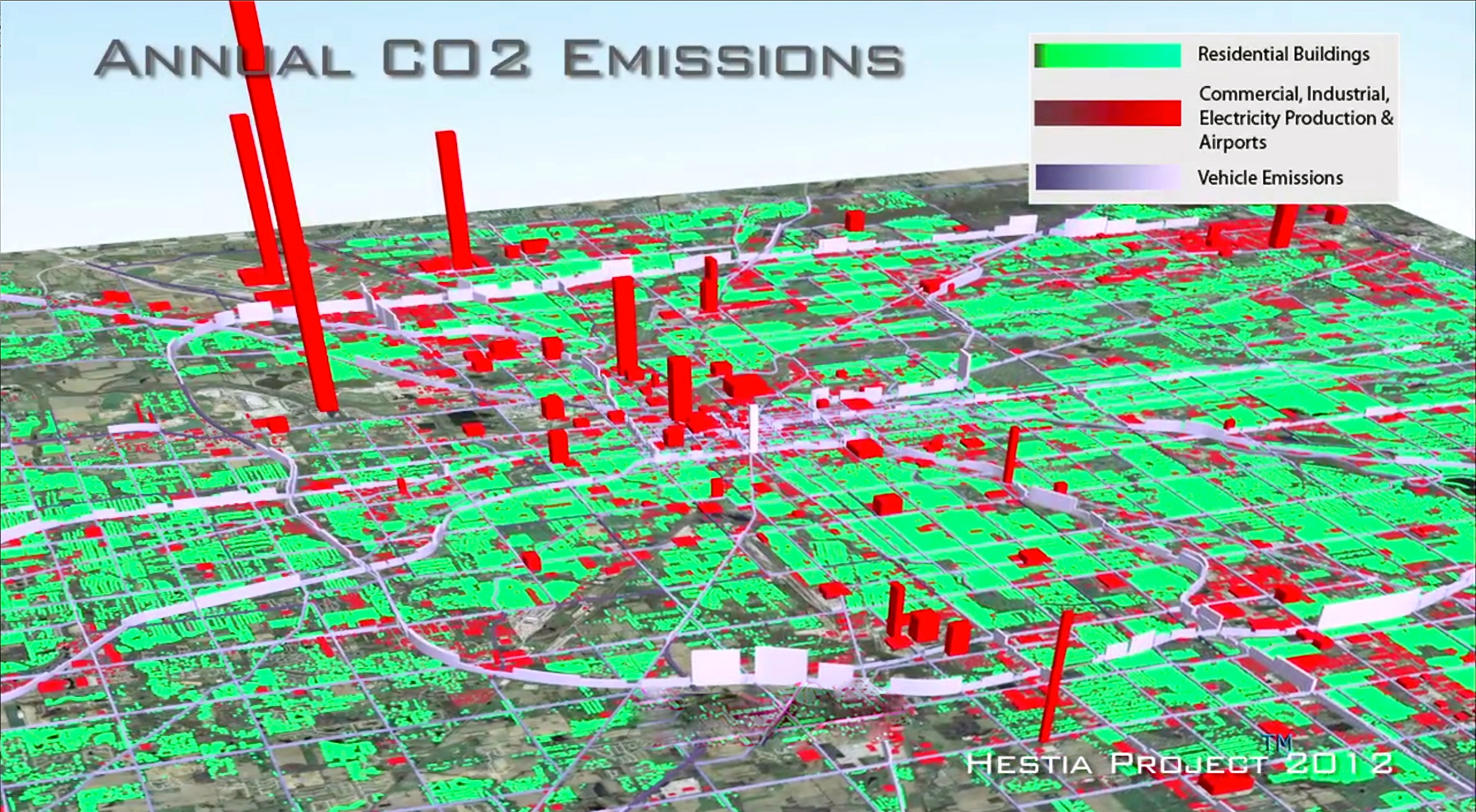 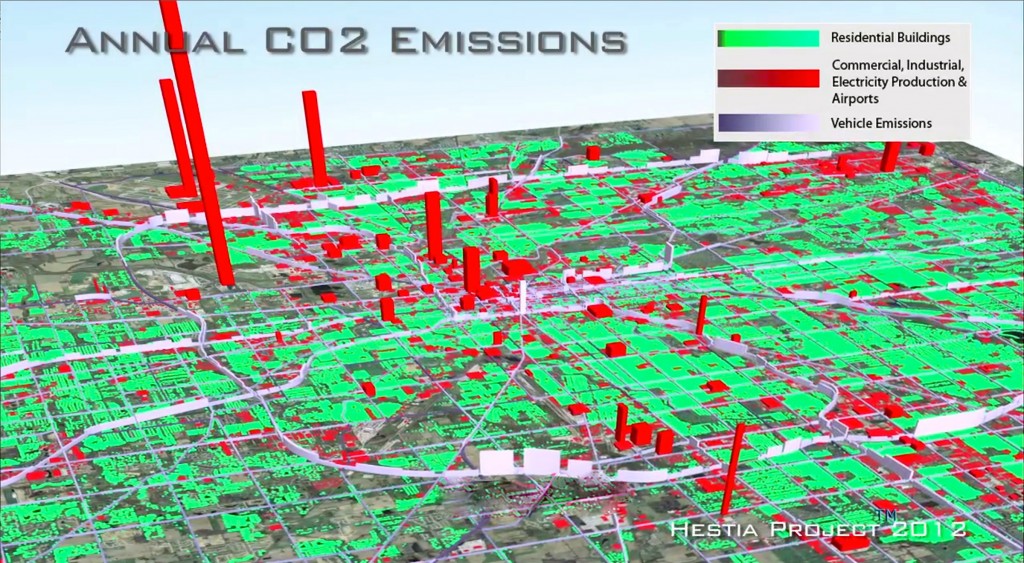 Researchers at ASU and Purdue University created a visualization of the Hestia system which shows the hourly, building-by-building dynamics of CO2 emissions in the city of Indianapolis.

Dubbed “Hestia” after the Greek goddess of the hearth and home, researchers presented the new system in an article published Oct. 9 in Environmental Science and Technology. Hestia combines extensive public database “data-mining” with traffic simulation and building-by-building energy-consumption modeling. Its high-resolution maps clearly identify CO2 emission sources in a way that policymakers can utilize and the public can understand.“Cities have had little information with which to guide reductions in greenhouse gas emissions – and you can’t reduce what you can’t measure,” said Kevin Gurney, an associate professor in ASU’s School of Life Sciences, and senior scientist with the Global Institute of Sustainability. “With Hestia, we can provide cities with a complete, three-dimensional picture of where, when and how carbon dioxide emissions are occurring.”

The research team collected data from a wide variety of sources such as local air pollution reports, traffic counts, and tax assessor parcel information. The data is then combined within a modeling system for quantifying CO2 emissions at the level of individual buildings and street segments.

So far, scientists have applied Hestia to the city of Indianapolis, and work is ongoing for the cities of Los Angeles and Phoenix. They hope to ultimately map the CO2 emissions in all major cities across the United States, which accounts for nearly one-quarter of all global CO2emissions. The Hestia research team believes this type of detailed emissions information will help determine what we as a society can do locally and globally about climate change.

“As a community, we must take a leadership role in sustaining our relationship with the environment,” said ASU President Michael M. Crow. “This research, and its implications for global engagement regarding climate change, is an exciting step forward. Hestia gives us the next tool we need to help policymakers create effective greenhouse gas legislation.”

According to researchers, Hestia’s increased detail and accuracy will help cities, and possibly even other nations, identify where an investment in energy and greenhouse gas savings would have the greatest impact.

“Leading in sustainability is not easy; however, as mayor, I am committed to doing so,” Phoenix Mayor Greg Stanton said. “Undoubtedly, Hestia will be a good tool to help us make more informed decisions as leaders in Phoenix and the Valley around issues of air quality, health and a sustainable future.”

“Hestia offers practical information we can use to identify the most cost-effective ways to reduce emissions and track progress over time,” Gurney said. “Scientists have spent decades describing the seriousness of climate change. Now, we are offering practical information to help do something about it.”

Note:
Hestia is part of a larger effort that combines information about emissions with ground and satellite-based measurements of atmospheric carbon dioxide concentration. It is now part of the INFLUX experiment in Indianapolis and is expected to complement NASA’s planned December 2013 launch of the Orbital Carbon Observatory satellite, which will measure the concentration of CO2 in the Earth’s atmosphere.