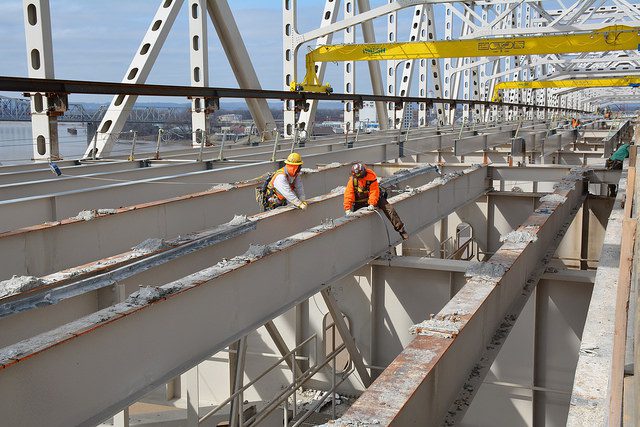 With the end of the project in sight, 2016 promises to be a busy, final year of construction for the Downtown Crossing portion of the Ohio River Bridges Project.

The Downtown Crossing includes the new Abraham Lincoln Bridge, an improved Kennedy Bridge and new interstate connections on both sides of the Ohio River. By the end of this year, the project will be substantially complete.

“We’re in the home stretch,” said Kentucky Transportation Cabinet Project Manager Andy Barber. “Crews have a busy year ahead, but it’s exciting to see it all come together. I know drivers are also excited to see the light at the end of the tunnel. By the end of this year, we’ll have a much safer and much improved transportation system.”

The Construction Guide can be found here.

The biggest and most complicated portion of the Downtown Crossing is rebuilding the Kennedy Interchange. Crews are untangling the many weaves of Spaghetti Junction, where I-65, I-64 and I-71 come together. Improvements will eliminate tight curves and short merges. Much of this year’s work will focus on I-64 East and I-64 West.

A new floor system is being installed on the Kennedy Bridge, with all new stringers, bearings and diaphragms the length of the bridge. More than 3.5 million pounds of old steel are being removed, with new steel installed. A new approach to I-65 South is also being built. The improvements should add decades of new life to the 52-year old bridge.

Kennedy Bridge to Open to Southbound Traffic in October

Safety is prompting one of the most significant changes in the 2016 schedule. The Kennedy Bridge will be closed longer than originally planned. While major improvements to the Kennedy Bridge remain on budget and on schedule, the full closure is being extended to help prevent some of the safety concerns and traffic flow issues observed earlier this year.

Southbound traffic is now scheduled to move to the improved Kennedy Bridge by late October. One lane was expected to open on the Kennedy in late July to carry traffic from I-65 South to I-64 East, I-64 West and I-71 North.

“While we know drivers are anxious to have these ramps open again, safety is our top priority,” said Barber. “We don’t want a repeat of the quick merges and long traffic backups we saw when we had a single lane of traffic open on the Kennedy Bridge.”

Nearly 28,000 drivers use I-65 South to access I-64 West, I-64 East and I-71 North on a daily basis, and those drivers have found the alternate routes that work best for them. The signed detours are I-265 and I-264. Local drivers are also using the Clark Memorial Bridge and surface streets to reach their destinations.

The new schedule also gives construction crews added flexibility as they complete work on the Kennedy. They’re building a new floor system, installing tolling equipment, building a new approach on I-65 South and making other improvements. The work is expected to add at least 35 years of new life to the bridge.

When the Kennedy opens in October, it will carry all southbound traffic. Northbound I-65 traffic will remain on the Lincoln Bridge.