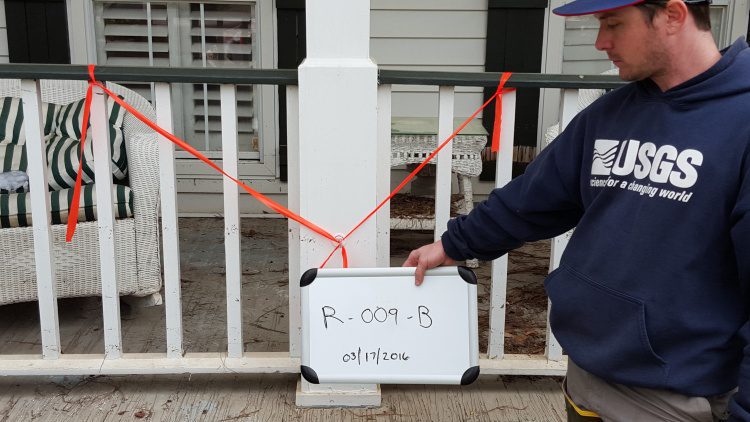 US Geological Survey water science specialists are in the field assisting flood relief work in Louisiana by documenting the extent of historic, long-lasting flooding this month across a broad swath of the state, from Shreveport in the northwest to the Pearl River in the southeast.

Triggered by a slow-moving low pressure system that dumped between 10 and 26 inches of rain across the state the week of March 7, the floods prompted a statewide federal disaster declaration. News media reported that the flooding caused four deaths, and Louisiana emergency managers said floodwaters damaged more than 11,000 homes and temporarily closed interstate highway I-10 at the Texas-Louisiana border, I-20 at three locations in North Louisiana, and I-49 south of Shreveport.

“A lot of people experienced flooding who had never experienced flooding before,” said Benton McGee, a USGS supervisory hydrologist based in Ruston, Louisiana and one of the coordinators of the ongoing fieldwork. “In some places this flooding is of a magnitude that we would not normally expect to see again in our lifetimes.”

More than two weeks after the rains began, several rivers and bayous remained above their official flood stage— that is, the point at which water overflows its confining banks, determined for many locations by the National Weather Service based on USGS streamgage readings and other records.

Working in two- and three-person teams, at least 34 USGS hydrographers from seven states – Alabama, Arkansas, Georgia, Louisiana, Mississippi, North Carolina and Tennessee – have collected more than 390 high water marks at sites ranging from USGS streamgages to fences, barns, houses, bridges and trees. “I’m proud of how USGS responded so quickly in this situation,” said Athena Clark, Deputy Director, USGS Lower Mississippi Gulf Water Science Center. “One of the strengths of the USGS is its ability to mobilize rapidly to provide timely and useful hydrologic data when decision makers need it the most.”

The high water marks, collected at the request of the Federal Emergency Management Agency, will document flood depths and extent. “FEMA will use this information to target flood relief aid to the areas where the need is greatest,” said Marie Peppler, USGS federal agency liaison and coordinator for the national USGS Flood Inundation Mapping Program.

A map of Louisiana’s March 2016 high water marks, with information about each mark, is available on the USGS Flood Information site.

At least 12 USGS streamgages recorded the highest volume of stream flow measured in those gages’ existence. On the Little River near Rochelle, Louisiana, a streamgage installed in 1958 broke a record for that site, documenting floodwater flows of 134,000 cubic feet per second. At that rate, the river would fill an Olympic-sized swimming pool, containing 88,000 cubic feet of water, in less than one second.

The USGS operates 260 streamgages throughout Louisiana to monitor water levels. The data collected at the streamgages are made available in real time to the public, local, state and federal agencies through the National Water Information System (NWIS). The information is used to assist flood forecasting, inform water management decisions, and help guide emergency relief efforts to the most affected areas.

For more than 125 years, the USGS has monitored flow in selected streams and rivers across the United States. The information is routinely used for water supply and management, monitoring floods and droughts, bridge and road design, determination of flood risk and for many recreational activities.

Flood and high flow conditions across the country can be observed in real time by visiting the USGS WaterWatch website. Customized updates about local water conditions can be obtained by signing up for information from a particular streamgage through USGS WaterAlert.