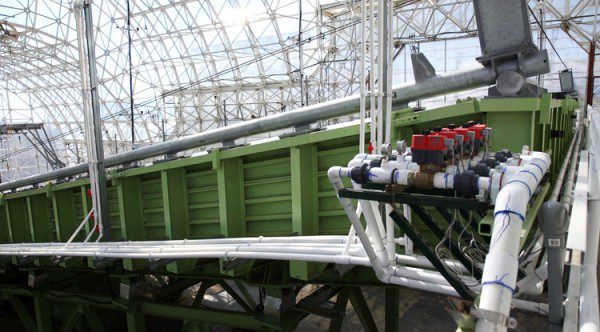 Perhaps it’s the hundreds of overhead windows that emulsify the incoming desert light. Or perhaps it’s the color of the steel housing — praying mantis green — that gives the surrounding space its otherworldly glow.

Perhaps, but this is no ordinary space. This is the University of Arizona’s Biosphere 2, home to three identical, massive hill slopes each contained within a green steel structure. The three slopes are collectively known as the Landscape Evolution Observatory, or LEO, the world’s largest laboratory experiment in the earth sciences.

Designing and building such a laboratory experiment was no ordinary undertaking. Just ask structural engineer Allan Ortega-Gutiérrez, who was instrumental in the structural design and construction phases of LEO.

“It’s interesting to work on a project like this because it breaks some of the rules that as a structural engineer I do every day,” says Ortega-Gutiérrez, a UA alumnus. “LEO is one of those things that becomes a marriage between science and engineering.”

Each of LEO’s hill slopes is 30 meters long and 11 meters wide, with an average slope of 10 degrees. Each slope is a 65-ton steel tray filled with 1 meter of crushed basalt rock. The tray holds more than 500 tons of the rock.

Starting off with the basalt in its initial state, scientists are observing each step of the landscapes’ evolution from the purely mineral and abiotic to living landscapes that will support microbial communities and vascular plants.

Standing at the base of one of the basalt-filled slopes, Ortega-Gutiérrez points to the ground, noting that he is standing on a concrete-reinforced slab with steel rebar tucked inside. Years ago, the slab supported 4 feet of soil where the Biospherians — four men and four women who took up residence for two years inside Biosphere 2 — grew their own food and crops.

Ortega-Gutiérrez says one of the biggest challenges he faced was building everything inside the original growing space without changing anything.

“We had to fit everything through the 10-by-12-foot door on the west side of the building,” he says. “It was a great coordination between the construction team and the engineering team to make sure the size of the pieces could fit.”

Beneath the slab now resides “a basement full of mechanical equipment that helps LEO breathe,” he says. That equipment not only brings air to LEO but recycles and purifies LEO’s water supply. LEO is equipped with a sprinkler system designed by Ortega-Gutiérrez and his colleagues at M3 Engineering and Technology.

LEO’s three giant hill slopes rest on load cells — electronic circuits that measure changes in the weight of the slope’s contents depending on how much water is added, runs off or leaves through evaporation or transpiration.

In addition, each slope is equipped with 1,800 sensors and sampling devices residing within or above each landscape. The sensors monitor variables such as carbon and energy cycling processes, and the physical and chemical evolution of the landscape.

Construction was finished in late 2012 — early and under budget. Now experiments are underway, and scientists are taking data and analyzing their findings.

Ortega-Gutiérrez gazes at one of the slope’s load cells. He says he was thrilled to put his designs for LEO down on paper and also to come “see it growing every week” while it was under construction.

“It’s like having a baby — you see that baby growing and you get to appreciate the progress,” he says.