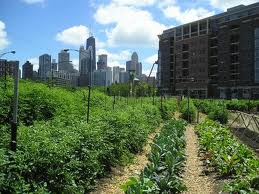 Although always a part of city life, urban agriculture has recently attracted increased attention from diverse groups in the United States, which promote it as a strategy for stimulating economic development, increasing food security and access, and combatting obesity and diabetes, among other goals. Developing effective policies and programs at the city or neighborhood level demands as a first step the accurate mapping of existing urban agriculture sites. Mapping efforts in major U.S. cities have been limited in their focus and methodology. Focusing on public sites of food production, such as community gardens, they have overlooked the actual and potential contribution of private spaces, including home food gardens, to local food systems. This paper describes a case study of urban agriculture in Chicago which used the manual analysis of high-resolution aerial images in Google Earth in conjunction with ArcGIS to identify and map public and private spaces of food production. The resulting spatial dataset demonstrates that urban agriculture is an extensive land use type with wide variations in the distribution of sites across the city. Only 13% of sites reported to be community gardening projects by nongovernment organizations and government agencies were determined, through image analysis, to be sites of food production. The production area of home gardens identified by the study is almost threefold that of community gardens. Study results suggest opportunities may exist for scaling up existing production networks—including home food gardens—and enhancing community food sovereignty by leveraging local knowledges of urban agriculture.