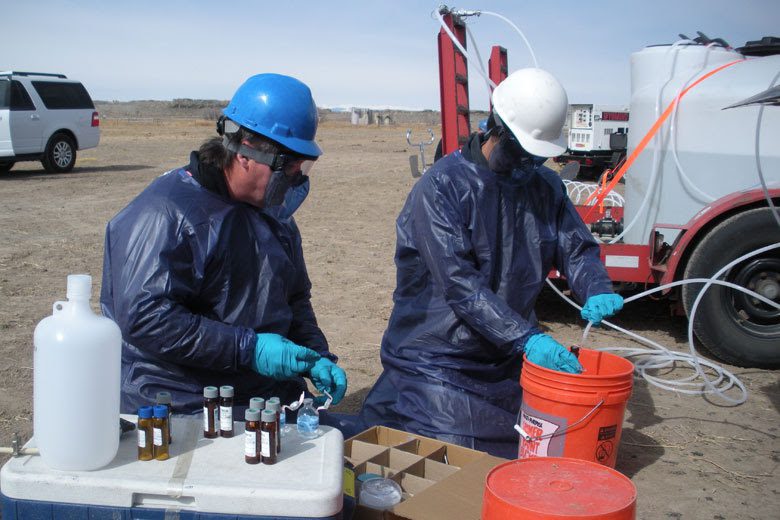 Only one industry is allowed to inject toxic chemicals into underground sources of drinking water – hydraulic fracturing, or “fracking.” Concerns about this practice have riled the U.S. political landscape and communities around the country, perhaps nowhere more so than in Pavillion, Wyoming, population 231.

A new study by Stanford scientists published in Environmental Science & Technology finds for the first time that fracking operations near Pavillion have had clear impact to underground sources of drinking water. The research paints a picture of unsafe practices including the dumping of drilling and production fluids containing diesel fuel, high chemical concentrations in unlined pits and a lack of adequate cement barriers to protect groundwater.

The well field has gone through several corporate hands since the 1960s, but various fracking operators have used acid and hydraulic fracturing treatments at the same depths as water wells in the area.

“Decades of activities at Pavillion put people at risk. These are not best practices for most drillers,” said co-author Rob Jackson, the Michelle and Kevin Douglas Provostial Professor at the School of Earth, Energy & Environmental Sciences.

“There are no rules that would stop a company from doing this anywhere else,” said Jackson, who is also a senior fellow at the Stanford Woods Institute for the Environment and at the Precourt Institute for Energy.

The study, based on publically available records and documents obtained through the Freedom of Information Act, is part of Jackson’s ongoing research on shallow fracking and its impact on groundwater. He and his colleagues have done various studies across the United States and in the Pavillion Field, an area of Wyoming’s Wind River Basin pocked by more than 180 oil and gas wells, some of them plugged and abandoned.

Back in 2008, the residents of Pavillion complained of a foul taste and odor in their drinking water and questioned whether it was related to physical ailments. In 2011, the U.S. Environmental Protection Agency issued a preliminary report putting the tiny town at the center of a growing fracking debate.

The EPA report, which linked shallow fracking to toxic compounds in aquifers, was met with heavy criticism from the drilling industry as well as state oil and gas regulators. Three years later, having never finalized its findings, EPA turned its investigation over to Wyoming. The state released a series of reports without firm conclusions, and, as of last month, has said it has no firm plans to take further action. In the meantime, the federal Agency for Toxic Substances and Disease Registry has advised area residents to avoid bathing, cooking or drinking with water from their taps.

The new Stanford study goes a step beyond the 2011 EPA report to document not only the occurrence of fracking chemicals in underground sources of drinking water but also their impact on that water that is making it unsafe for use.

“Geologic and groundwater conditions at Pavillion are not unique in the Rocky Mountain region,” said DiGiulio. “This suggests there may be widespread impact to underground sources of drinking water as a result of unconventional oil and gas extraction.”

To avoid what happened in Pavillion, Jackson and DiGiulio suggest further investigation and regulations to limit shallow fracking and require deeper protective casings. Wyoming does not require the cementing of surface casings, and only two U.S. states, Colorado and Texas, have special requirements for shallow hydraulic fracturing. Safeguards mean little, however, if they are not enforced – something the EPA has done a mixed job with, according to Jackson.

“The EPA has consistently walked away from investigations where people and the environment appear to have been harmed” by fracking’s impact on groundwater, Jackson said.