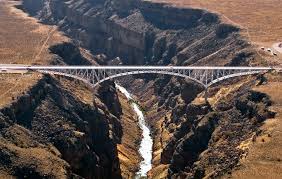 New research can help water managers along the Rio Grande make wise decisions about how to best use the flow of a river vital for drinking water, agriculture and aquatic habitat. These studies also show how conditions from the prolonged drought in the West have affected the Rio Grande watershed.

The Rio Grande forms the world’s longest river border between two countries as it flows between Texas and Mexico, where it is known as the Rio Bravo. The river runs through three states in the U.S., beginning in southern Colorado and flowing through New Mexico and Texas before it forms the border with Mexico.

Parts of the Rio Grande are designated as wild and scenic, but most of the river is controlled and passes through several dam and reservoir systems during its 1,896 mile journey to the Gulf of Mexico. The river is managed through a complex system of compacts, treaties, and agreements that determine when and how much water is released along the river’s length.

The amount and timing of water releases have varied in recent years due to drought. Recent USGS research on the middle Rio Grande looked at the effects of those changes on the amount of salts that build up in the Rincon and Mesilla Valleys in Texas and New Mexico. Results showed a decline in the amount of salt carried by the river due to a decrease of releases during the drought. The two valleys responded differently to the decreased releases. Salt levels in the Rincon Valley declined, whereas salt levels in the Mesilla Valley increased. Salt buildup in the soil and water can affect agriculture, which is an important industry in those valleys.

Successfully managing water use along the river is important to the sustainability of agricultural and communities along the river. To help with that goal, USGS has measured water gains and losses to the Rio Grande from between the Leasburg Dam near Leasburg, New Mexico, and the American Dam near El Paso, Texas. American Dam is near where the Rio Grande becomes the border with Mexico. For the past several years, drought conditions contributed to decreasing flows along this 64-mile stretch, and sections of the river were dry during parts of the year.

By characterizing the interaction between surface water from the Rio Grande and groundwater from the aquifer system, scientists provide valuable information to help managers make informed decisions about water use.

In addition to helping decision makers determine how to best manage the river for human use, USGS scientists are studying how native fish and their aquatic habitats are affected by different streamflow conditions along the river. For example, previous investigations have shown that the decline in Rio Grande silvery minnow may be attributed to modifications of the natural streamflow regime, channel drying, construction of reservoirs and dams, stream channelization, declining water quality, and interactions with nonnative fish. Understanding native species habitat limitations is important for decision makers to better plan future flow operations to meet desired resource goals.

More information on the research and results discussed in this release can be found in the following studies: