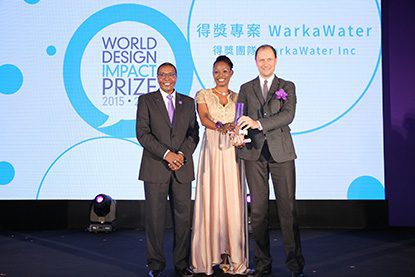 Arturo Vittori, CEO of research and design studio Architecture and Vision, accepted the award for the Warka Water project, a structure that collects rain and harvests fog and dew from the atmosphere. It was conceived for communities in rural areas in Ethiopia with limited access to safe drinking water.

Warka Water was among three finalist projects for the Prize including HappyTap, represented by Mr. Geoff Revell, Program Director at WaterSHED; and Re:Build, represented by Luca Drigani, Co-founder and Coordinator at the Pilosio Building Peace Foundation and Cameron Sinclair, Small Works Partner and Design Advisor for the Re:Build project. All three projects were presented to an audience of local designers earlier in the day at a seminar held at the Taiwan Design Center in Songshan Cultural and Creative Park.

The WDC International Design Gala Signature Event, held at the Mandarin Oriental Hotel, provided an opportunity to celebrate design, in particular design that aims to improve quality of life by solving complex social problems. The Mayor of Taipei, Mr. Wen-ji Ko, and Commissioner of Cultural Affairs for the Taipei City Government Beatrice Hsieh were among the 500 guests, including many members of the local and international design community. The Mayor of Eindhoven, Rob van Gijzel, was also present.

“Designing a better world is only possible when we leverage our strength and work together as a community to address common challenges that impact us all,” said Icsid President Dr. Mugendi M’Rithaa. “Throughout this World Design Capital year in Taipei, we have the opportunity to collaborate and to share best practices in design-led innovation to improve peoples’ lives. Through the theme, Adaptive City – Design in Motion, Taipei City is looking to build a more liveable city and we are excited to be a part of this journey with you.”

Dr. M’Rithaa also announced the launch of the first Rado Star Prize Taiwan, continuing Rado’s long tradition of encouraging innovation and young talent. Rado is a World Design Partner® and is working in conjunction with WDC Taipei 2016 to activate local programmes that help promote the role of design in effecting positive change.

About the International Council of Societies of Industrial Design (Icsid)

With more than half the world’s population now living in cities, design has become an increasingly fundamental tool for making cities more competitive, attractive, liveable and efficient. The World Design Capital® (WDC) is designated by Icsid every two years to recognize a city’s innovative use of design for economic, social, and cultural development and to showcase effective design-led revitalization strategies and projects that other cities can benefit from. Torino (Italy) was the first WDC in 2008, followed by Seoul (South Korea) in 2010, Helsinki (Finland) in 2012, Cape Town (South Africa) in 2014, and now Taipei (Taiwan, Chinese Taipei) in 2016. Mexico City (Mexico) has been named WDC 2018.
www.worlddesigncapital.com

About the World Design Impact Prize

The World Design Impact Prize is an international prize awarded every two years by the Icsid to an industrial design driven project that aims to benefit society. A multi-disciplinary panel of experts selects a shortlist for the Prize, which is then voted on by the more than 140 Icsid member organizations. The first project to be awarded the Prize was the Community Cooker in 2012, followed by the ABC Syringe in 2014.
www.worlddesignimpact.org