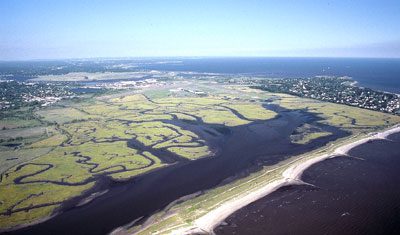 Water quality in Connecticut streams flowing into Long Island Sound has steadily improved over the last 40 years, according to a new U.S. Geological Survey study.

USGS has been monitoring water quality in the state’s streams for 43 years, since the implementation of the Clean Water Act in 1972. Nitrogen concentrations in the streams studied have decreased significantly adding to the overall water quality improvements. These nitrogen decreases are due to several factors including upgrades in wastewater facilities, and reductions in nitrogen from precipitation.

Phosphorous has also decreased, most likely due to improvements in wastewater treatment and the removal of phosphorus from laundry detergents between 1972 and 1995.  Decreased concentrations of nitrogen and phosphorus have led to reduced loads (the total mass discharged from the rivers), when adjusted for variations in streamflow conditions, averaging about 24 and 47 percent, respectively at the sites studied in this investigation.

“Water-quality in these streams has improved dramatically over the time period of the study, particularly for the nutrients nitrogen and phosphorus, however concentrations and loads of chloride increased at nearly all of the sites studied” said John Mullaney, hydrologist and author of the study.

“Chloride has increased significantly likely due to deicing salts applied to public roads and private property, as well as discharges from wastewater treatment facilities and on‐site septic systems. Studies like this highlight the importance of long-term data collection in our ability to evaluate trends in water quality and streamflow,” said Mullaney.

An additional finding from the study was that streamflows at the sites studied were generally increasing with time, particularly during the summer and the fall seasons. Increases in streamflow are related to long-term changes in weather and climate patterns, such as increases in summer precipitation, but also can increase due to urbanization. In general, increases in streamflow usually coincide with increased nutrient loadings to streams.

“This study shows that regional management efforts to reduce nitrogen pollution have been effective, despite more water runoff over the past decade.” said Mark Tedesco, Director of the U.S. Environmental Protection Agency’s Long Island Sound Office. “This means improved river and stream water quality and, downstream, in Long Island Sound. The report results also make it clear that possible changes to rainfall in the region predicted to occur from climate change need to be considered in the future management of Long Island Sound.”

According to the Connecticut Department of Energy and Environmental Protection, one of Connecticut’s management strategies to reduce nitrogen loading to Long Island Sound was to develop an innovative nitrogen-trading program among the 79 wastewater treatment plants located throughout the state. Through the Nitrogen Credit Exchange, established in 2002, the Connecticut program has reduced nitrogen discharges to water bodies in Connecticut, meeting or exceeding the reduction goal of 58.5 percent by 2014.

The study, Nutrient, Organic Carbon, and Chloride Concentrations and Loads in Selected Long Island Sound Tributaries: Four Decades of Change Following the Passage of the Federal Clean Water Act, SIR 2015-5189, was conducted in cooperation with the Connecticut Department of Energy and Environmental Protection, and is available online.