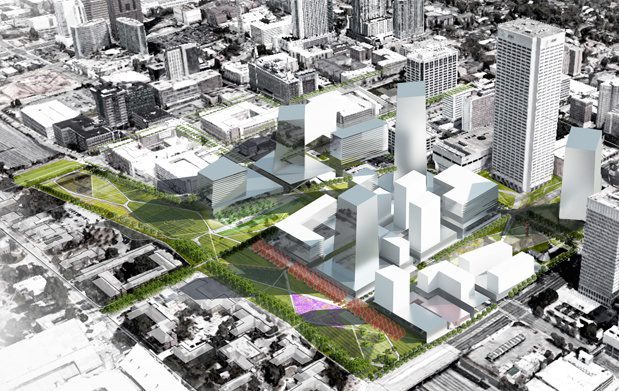 Four university teams—including two from Harvard University, one from the Georgia Institute of Technology, and one from the University of Miami—have been selected as the finalists for the 14th annual Urban Land Institute Hines Student Competition, an ideas competition that provides both full- and part-time graduate-level student teams with the opportunity to devise a comprehensive design and development scheme for an actual, large-scale site in an urban area. The four teams are advancing to the final round of the competition in April, where they will compete for a $50,000 first-place prize.

“The jury was excited to see the level of quality and interest in the competition, the demonstration of creative ideas, and presentation of viable development projects,” said jury chair Tara Carter Hernandez, president of JCH Development in New Orleans. “As a ‘thought competition,’ the integration of thoughtful ideas, as well as skill sets and teamwork, is what will be required for the real-world experiences the students will encounter in their future work, meeting the true intent of the program.”

The 2016 competition challenged student teams to design and submit a master-plan proposal that included presentation boards with drawings, site plans, tables, and market-feasible financial data for an area in Atlanta’s Midtown neighborhood. This year’s competition is designed to simulate an actual urban planning and development scenario, with some details changed for the purposes of the competition. It is based on a hypothetical situation in which key area landowners have reached out to owners of smaller parcels and have come together as a group with a common strategy supporting the vision for building mixed-use sustainable and vibrant neighborhoods. In this competition scenario, teams are tasked with transforming this transitional area and completing the vision for Midtown as a thriving, sustainable, mixed-use, walkable, and transit-accessible neighborhood; the exercise includes taking advantage of the site’s proximity to downtown and Technology Square, its adjacency to Peachtree Street and public transportation, and its strong regional access.

The finalist teams and development schemes are as follows (in alphabetical order by school):

Harvard University: “Converge ATL” weaves together a hybrid-urban landscape that increases value for all real estate blocks in Midtown Atlanta by integrating the disparate city blocks separated by Interstate 85.

Harvard University: “The Midtown Beat” weaves together a strategy for the redevelopment of the Midtown neighborhood that capitalizes on some of the district’s innovation, culture, and health.

University of Miami: “The Matrix” is a mixed-use development program named to reflect Midtown’s role as Atlanta’s lead district in technological advancements.

Though based on a hypothetical situation, the 2016 Hines Student Competition reflects many real-life concerns of Atlanta. In recent years, the city has supported increased market demand for urban real estate products with strategies to attract investment in its urban core and along key commercial corridors.

“The teams demonstrated a good sense and understanding of Atlanta’s general market and social conditions in their proposals,” said juror Constance Callahan, first vice president of SunTrust Community Capital in Atlanta. “They each suggested a healthy mix of uses to activate the area at various times of the day and night. I was pleased how most teams promoted the idea of pedestrian and recreation opportunities in and around the subject area while enhancing the connections to both Georgia Tech and to MARTA [the Metropolitan Atlanta Rapid Transit Authority].”

“As a resident of Atlanta’s Midtown and a real estate professional, reviewing these proposals has been particularly enjoyable and inspiring,” added juror Katherine Molyson, vice president at Cousins Properties in Atlanta. “The students’ range of diverse backgrounds and contexts has helped to challenge preconceived notions of this Midtown site. A solid understanding of the market conditions and neighborhood dynamics, along with compelling underwriting, was evident with the finalists’ submissions.”

The competition jury consists of renowned experts from diverse backgrounds in real estate development. Jurors represent a strategic mix of land use experts, including developers, brokers, architects, urban designers, landscape architects, urban planners, and policy officials. Four of the 12 jurors, including Callahan and Molyson, are Atlanta-based professionals who help provide insight into whether proposals take into consideration local cultural, economic, and political issues. Similar to the nearly equal split of men and women among the participating students, the 2016 competition cycle represents the first time there is an equal gender distribution among jury members.