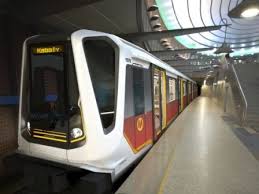 Metropolitan EAD, the metro operator of Sofia, Bulgaria, commissioned a consortium consisting of Siemens and the Polish train manufacturer Newag for equipping the new metro line 3 in the capital of Bulgaria. The order is worth around 140 million euros and comprises the delivery of 20 Inspiro type metro trains and the Trainguard MT automatic train protection system, using wireless CBTC technology (communications-based train control) to achieve automatic operation. An option for ten more trains and the related automation system is also part of the contract. The line is planned to be put into operation in 2019.

“Sofia marks another European capital that has decided in favor of mass transit vehicles and train automation equipment from Siemens. The inner-city transportation services in particular have to cater to ever-increasing demand. For this purpose, we have developed a rolling stock and trackside equipment that combine high transport capacities with low operating costs,” said Jochen Eickholt, CEO of the Siemens Mobility Division.

The Bulgarian capital is bursting at the seams under an increased individual transport. The inner-city transportation networks need to meet these increasing requirements. Relief in this situation is expected above all from the underground projects that are currently being implemented. One project involves the construction of a new metro line, which the capital decided in 2011. This new third line will create an east-west link that will run 18 kilometers mostly under the city and also at ground level outside the central parts and will serve 18 stations. The financing of the project is ensured at 70 percent by the European Union (EU) under the Operational Program “Transport and Transport Infrastructure” and 30 percent are locally co-financed.

This order now relates the first phase of this construction project for the first eight kilometers with eight stations. The scope of supply of the consortium comprises the automatic, CBTC-based train control system (onboard and wayside), the Trackguard interlocking, the automatic train supervision system Controlguide OCS, the voice radio and data transmission system, the Supervisory Control and Data Acquisition (Scada) system, the wayside digital communication network, and half-height platform screen doors for the stations.

When completed, the metro system with its three lines will form a triangle underneath the center of Sofia so that passengers will only have to change once to get to a station on one of the other lines.

The Inspiro car bodies will be produced at Siemens’ plant in Vienna, Austria, while the bogies will come from the Siemens’ plant in Graz. Final assembly, factory train testing, and static commissioning of the trains will take place at Newag’s plant in Nowy Sacz, Poland.