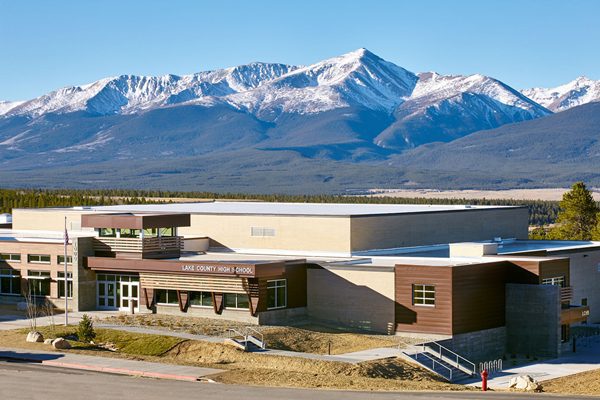 “Associated Builders and Contractors is honored to recognize Adolfson & Peterson Construction with a well-deserved Excellence in Construction Eagle Award for their commitment to high quality construction, innovation and safety in their work on Lake County High School,” said 2016 ABC National Chair David Chapin, president of Willmar Electric Service, Lincoln, Neb. “AP’s performance is a great example of the impressive work Associated Builders and Contractors’ member companies produce and we are happy to claim this project for the merit shop construction industry.”

Situated at an elevation of 10,152 feet, Leadville is the highest incorporated city in the United States. With an average of 278 days annually with freezing temperatures, extensive planning was taken by the project team for the harsh seasonal conditions. The project was completed during a winter with so much snow the school district canceled school for a snow day for only the second time in 100 years.

Working on a fully occupied campus also located across from the hospital required coordinating steel erection with emergency helicopter flights. The school was open for both the 2013-2014 and 2014-2015 school years.

The project encompassed three separate additions that nearly doubled the size of the school. A new high school classroom 50,000-sf addition – a double stacked wing – includes up-to-date science labs and wireless connection throughout, making every area a learning environment. Two small additions to an administrative area and around a stairway completed the 114,000 total square footage of the new school.

The Excellence in Construction Awards program is the industry’s leading competition, developed to honor innovative and high-quality merit shop construction projects with eagle awards presented to the top project in each category. The award honors all construction team members, including the contractor, owner, architect and engineer. The winning projects, selected from entries submitted from across the nation, were judged on complexity, attractiveness, unique challenges overcome, completion time, workmanship, innovation, safety and cost.

Adolfson & Peterson Construction is a U.S.-based, privately held firm that is consistently ranked among the top 50 construction managers and general contractors in the nation. Founded in 1946, the company has built longstanding commitments to the regions in which it operates and is known nationally for its innovative and collaborative approaches within the building industry. Adolfson & Peterson Construction serves the education, multifamily, healthcare, commercial, municipal and senior living market segments from its offices in Charlotte, Dallas, Denver, Minneapolis, Phoenix, Portland and Tacoma. For more information, visit www.a-p.com and follow us on Facebook, LinkedIn and Twitter.

Associated Builders and Contractors (ABC) is a national construction industry trade association representing nearly 21,000 chapter members. Founded on the merit shop philosophy, ABC and its 70 chapters help members develop people, win work and deliver that work safely, ethically, profitably and for the betterment of the communities in which ABC and its members work. Visit us at abc.org.