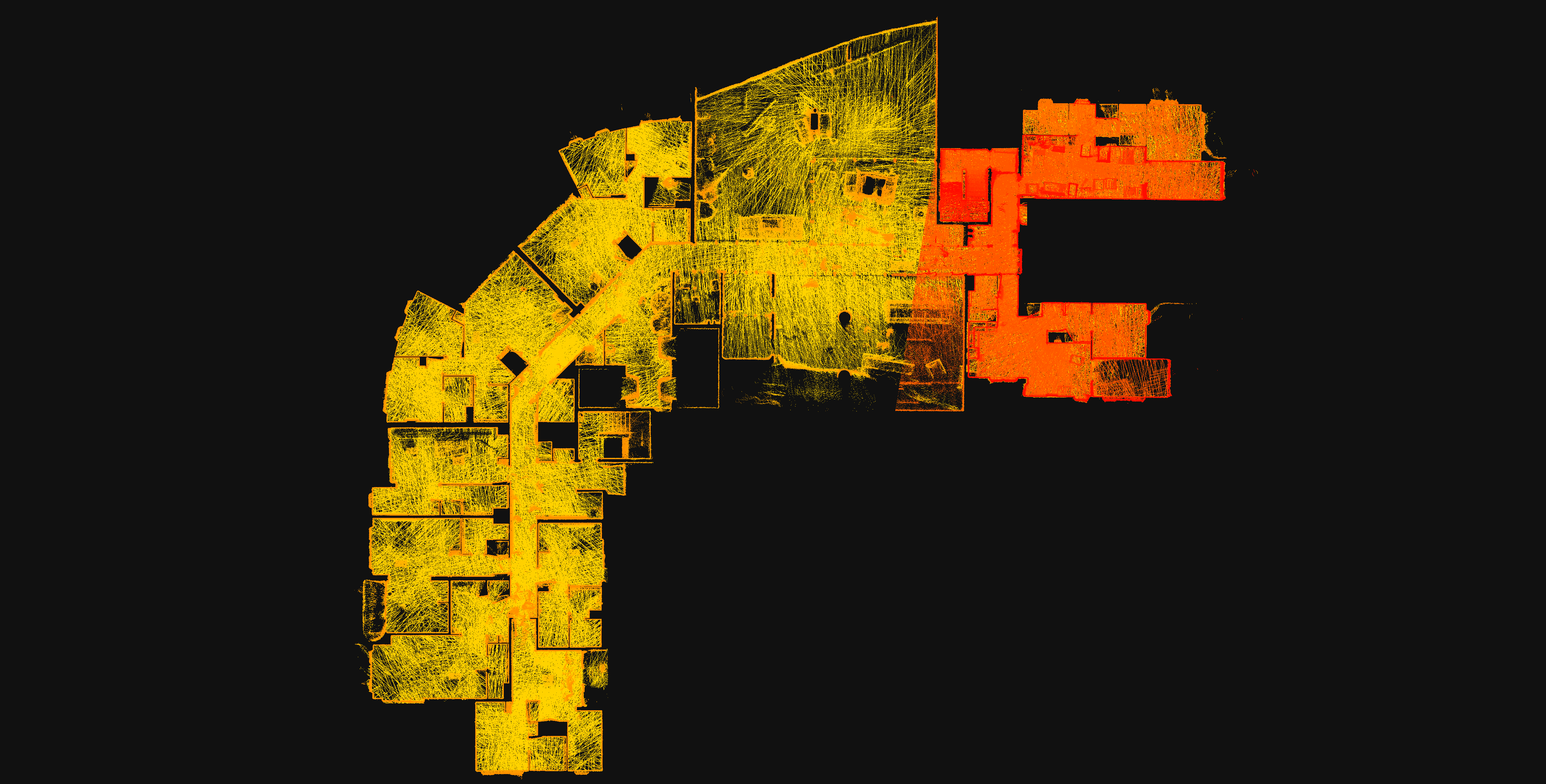 GeoSLAM are delighted to announce the launch of the ZEB-REVO – the next generation in our range of mobile, handheld 3D laser scanners. The ZEB-REVO builds upon the success of its predecessor, the award-winning ZEB1, with a faster scanner, even simpler operation and greater versatility. At its core is GeoSLAM’s industry leading Simultaneous Localisation And Mapping (SLAM) algorithm, which facilitates rapid mobile mapping of enclosed environments without the need for GPS.

This versatility renders the ZEB-REVO suitable for a large variety of applications that would otherwise prove difficult or time consuming using traditional survey techniques;

Similar to the ZEB1, the ZEB REVO captures 43,200 points per second.  However, the sensor line speed has been increased to 100Hz, producing 2.5 times the number of scan lines. When combined with the auto-rotation of the sensor head, a marked improvement in the resolution, cleanliness, and structure of the resulting point cloud is achieved. In addition to facilitating the identification of smaller features, the improved resolution also assists in producing better-quality SLAM registration results

As the ZEB REVO automatically revolves at the press of a button, it no longer has to be manually nodded, making the scanner much more discrete and incredibly adaptable for use in different environments.

“The ZEB-REVO has been designed with versatility in mind” says Chief Technical Engineer Ric Durrant. “The autonomous head rotation allows for the REVO sensor to be handheld but also backpack or pole mounted, trolley or vehicle based, or even attached to a UAV. Such versatility opens the doors to a wide variety of applications. “

Weighing in at only 3.5Kg, the mobility, simplicity, and versatility of the ZEB REVO coupled with an IP64 rating means the system can be deployed in multi-level, harsh environments such as mines and caves that would simply not be possible with other trolley based indoor mapping systems.

Comprising just 2 elements (scanner head and data-logger/battery) and 2 cables, the kit is assembled in seconds. Within 1 minute and 2 button pushes the scanner head is rotating and ready to survey. After initialisation (and with the data-logger stored in the handy backpack), the scanner is ready to be picked up and 3D data capture commenced. Data is collected at walking speed meaning that a typical residential or commercial property can be surveyed up to 10 times faster than when compared to traditional survey techniques.

Mark Reid, Chief Operating Officer of GeoSLAM said “the speed of survey and simplicity of use achievable with the ZEB-REVO is set to disrupt the market, blurring the lines between the role of the surveyor and the technology-savvy end user.

The ZEB-REVO has a scan range of up to 30m indoors, 15-20m in outdoor environments. However, densely covered, ‘feature-rich’ environments such as forests are ideal and are practically considered to be ‘indoor’ to the scanner. The unit features a 55GB data logger, onto which all scanned data is stored. File size is however minimal compared to other terrestrial scanning solutions meaning that up to a month’s worth of data can be stored without clearing the data logger. Once acquisition is complete the compressed data is downloaded to a USB stick ready for registration.

Automatic SLAM registration is achieved by either uploading to the GeoSLAM Cloud (via an internet connection) or processed locally using the new GeoSLAM Desktop. The GeoSLAM cloud offers a pay as you go model using pre-purchased credits. This provides users flexibility and minimises upfront capital expenditure thus helping to make the technology accessible to all. For high usage users, the security conscious, or those customers that wish to view the registered data whilst in the field, GeoSLAM Desktop offers the perfect solution. With unlimited processing and drag ‘n’ drop automatic registration, GeoSLAM Desktop can be run on a laptop or tablet. Once registered the resulting LAS file can be post processed directly in most industry standard point cloud and CAD packages.

Graham Hunter, Managing Director of GeoSLAM said “The ZEB-REVO fulfils a new niche in the market for ultra-mobile indoor mapping solutions. Our early adopters have been thoroughly impressed with the ease of operation, vastly reduced scan time and accuracy of the resultant point cloud, all from surveying just 1 closed loop. It won’t be long until the ZEB-REVO is a ‘go-to’ standard in the surveyor’s toolkit”

For more information, to request a demonstration or to view a dataset, visit is atgeoslam.com or email info@geoslam.com