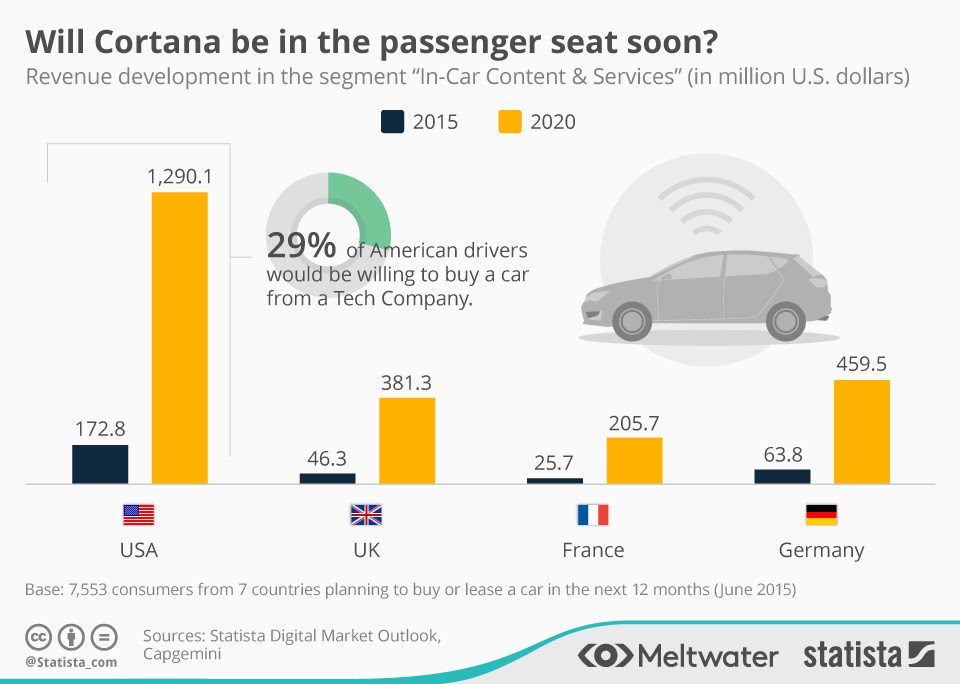 New York, March 11, 2016 – During the past few years it has become a daily routine to use smartphones to play our favorite playlist or to use the hands-free unit to make phone calls. However, the car’s intelligent connection to daily processes is capable of a lot more – as forecasted by Statista’s Digital Market Outlook.To date the industry of connected cars is still in the beginning phases: this year there will be approximately 11 million connected cars in America. According to the DMO, almost 32 million intelligent cars will be driving on America’s streets by 2020. Worldwide the number of connected cars will rise to 160 million intelligent vehicles.

The main impact of the enormous growth of the market comes from the rapid development of new features and possibilities. The biggest segment however, according to the DMO, is not the Infotainment but the security and driving assistance. This market is clearly being dominated by China. The revenue of the safety and supporting upgrades of connected cars in China will hit 4.7 billion dollars this year. Google and Apple have already announced their cooperation with VW – as of the beginning of 2016 almost every Volkswagen vehicle is compatible (for a little extra charge) with a smartphone. This enables feature such as a locking mechanism controlled through the phone or allowing the user to check how much gasoline is left in the tank.

However, the most rapid growing segment of connected cars is the intelligence maintenance and diagnosis of the cars – and even of the drivers. This segment has seen a growth of over 200% in revenue in 2015.
Since the annual Tech-Highlights have been presented at the CES in Las Vegas, it is clear: Microsoft will join the race of the software market leaders on the connected car market.

Regarding the forecasts of Statista, which reveal a revenue growth of over 30 percent on the American market alone, visualizes the huge potential for the software provider.

Beside entertainment such as watching movies or streaming music, Microsoft has set its focus on business features in particular. Volvo-drivers were chosen to be the first concrete partners to enjoy the extensive use of their Microsoft Office 365 on the morning drive to work.

Writing e-mails with help of the voice recorder, creating a schedule or making phone calls via Skype. Of course the driver will not be forced to operate all those functions manually but will be taken care of by Cortana, the intelligent voice control of Microsoft and pendent to Siri, which ensures a simple and safe operation. This way, apps such as PowerPoint, Excel or Word will soon be a part of the car, just like the radio is. To optimize the connection between car and software, Microsoft also announced, besides the cooperation with Volvo, a close collaboration with the car accessories specialist Harmans.