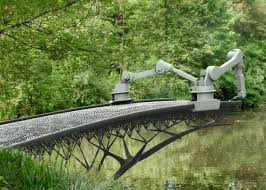 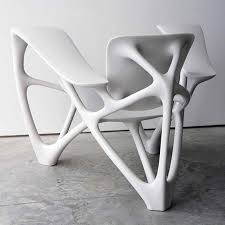 Tim Geurtjens from MX3D spoke about building a 3D printed bridge in Amsterdam at the REAL 2016 event in San Francisco this morning. The company Joris Laarmanlab has been building high-end furniture for some time and has been interested in using new materials and 3D printing to expand what’s possible.

The company developed a 3D printing method to extrude a urethane resin and print in 3D space. They use six axis rather than the typical three allowing you to move outside the build environment, which allows for large and complex structures.

The next step was to build a printer that goes beyond the plastic to print in metal. Combining robots and welding machines allows for printing in metal, but the software to drive the machine has been the challenge. The working title for the software is MX3D Library, which is a link between the CAD model and the 3D printer. The software makes the 3D model printable and writes kinematics for the robot for everything that it does as well as maps out the workflow for the robot to address the printing problem. The software logs the data from the process and hopefully with machine learning they can get an automated system that does quality control and can improve on the technique.

The team is focusing on making this easy and fast. They’ve done many tests of lattice structures, surfaces, tubes and even a bike frame. Another proof of concept is the Dragon Bench.

Their next project will be the printing of a 3D printed bridge in Amsterdam. The location for the MX3D printed bridge is in the middle of the Red Light District where it is busy and crowded. Given the crowd, they can’t print the bridge there live due to safety issues.

The final design for the bridge should be ready in a few months. Given 3D printing, they are entirely open on approach without constraints on approach or look. They are using Autodesk’s Dreamcatcher software to design.

They are mocking up a 1:1 mock-up of the canal and hope to start printing by the end of the summer. The bridge will take six or seven months to print and should be live in 2017.