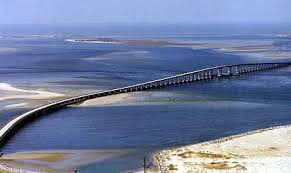 RODANTHE – Governor Pat McCrory broke ground on the Herbert C. Bonner Bridge replacement over Oregon Inlet today. The official beginning of construction marks a long-awaited milestone for people who live, work or visit the Outer Banks from throughout North Carolina and from around the world.

“This is a historic moment to be able to finally put our shovels in the ground and say that construction of a new, 21st Century Bonner Bridge is underway,” said Governor McCrory. “I want to thank my incredible team for helping make this day possible. I am proud to say to the people of the Outer Banks that your lifeline, a new Bonner Bridge, is on its way and it will be engineered and built to last for generations to come.”

“I’m proud that my administration could finally break through the litigation stalemate that had this project stalled for years,” said Governor McCrory. “Bonner Bridge is a lifeline for Hatteras Island. To see this project actually break ground will be a great day for the people who live and work on the Outer Banks and throughout North Carolina, as well as millions of visitors from across the state, nation and world.”

The new bridge is designed to have a 100-year life span and is scheduled to open to traffic in November 2018. The overall project, including the demolition of the existing bridge, is scheduled to complete in September 2019.

“Thanks to the leadership of Governor McCrory, the people of Hatteras Island will have a safe, modern bridge that they can rely on for access to jobs, health care, education and recreation,” said Secretary Tennyson. “The new Bonner Bridge will be built with the best materials available to protect it against the harsh salt air and water and will be the first in the state built using stainless reinforcing steel, which will provide additional protection and reduce maintenance costs.”

Another benefit of the new bridge is that the high rise will be 3,500 feet long and have seven navigational spans, each averaging about 300 feet in width, which will provide more options for navigation under the bridge. Comparatively, the arched high rise of the existing bridge provides for only one navigational span with an opening of 130 feet.

“The people of the Outer Banks anxiously waited for decades to see this critical project move forward, and Governor McCrory got the dirt moving and construction underway,” said N.C. Board of Transportation Member Malcolm Fearing. “I want to thank Governor McCrory for his strong leadership, and as a life-long Outer Banks resident with deep family roots here, I am so proud to be a part of his team on this.”

Built in 1963, the existing bridge replaced an hour-long ferry ride over Oregon Inlet that could not operate in inclement weather or carry the growing population of islanders and tourists who sought to enjoy the cultural and natural beauty of the Southern Outer Banks. Today, the bridge carries tens of thousands of residents and visitors daily, helping support the state’s tourism industry and providing a critical evacuation route.

The N.C. Department of Transportation began working with the local community, as well as state and federal resource agencies, on plans to replace the existing bridge with a new parallel one in 1989. After reaching agreement on how and where to build the bridge, a contract was signed in 2011 for the design and construction of the new bridge, but construction was stalled by litigation.

In June 2015, after four years of delay, Governor’s McCrory’s NCDOT team reached a settlement agreement with the petitioners that allowed the state to move forward with replacing the Bonner Bridge with a new parallel bridge.