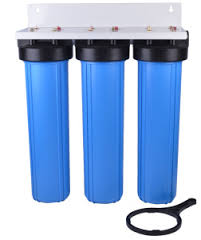 Chicago— Bluewater, one of the leading water purifier brands in North America, today said a new U.S-wide survey showing just under half of Americans lack confidence in the safety of their tap water is disturbing.

“U.S.  health and public infrastructure authorities need to act on the fears of Americans in one of the world’s most technologically advanced nations about the safety of their tap drinking water,” said Lin Guo, who heads Bluewater’s U.S.A operations.

Speaking at the International Home+ Housewares Show in Chicago, March 5 – 8, Ms. Guo referred to the AP-GfK Poll of 1,033 adults in mid-February that showed only about half of Americans are confident in the safety of their tap water. The study also revealed a majority think lead contamination of the tap water in Flint, Michigan, indicates a more widespread problem, rather than an isolated problem.

Kansas-based Bluewater donated two of its high-performance PRO water purifiers capable of purifying and delivering 1,248 gallons of purified water per day direct from a kitchen tap to two charities in Flint in January. Designed to capture practically everything down to 0.0001 microns (that’s 500,000 times less than the diameter of a human hair, Bluewater’s patented filtration technologies can remove lead and other toxic contaminants, including chemicals and microorganisms, from tap water.

“If local governments cannot make the right decisions to protect safe tap water, people need to be informed they should take matters into their own hands by installing highly reliable point-of-use water purifiers such as Bluewater’s to safeguard themselves against drinking contaminated water,” said Ms. Guo.