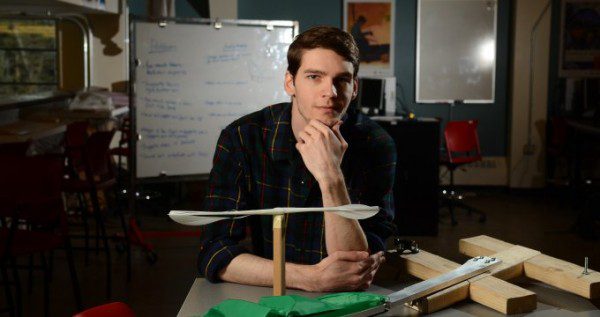 Since childhood, Michael Carruth, a junior in the environmental design program at CU-Boulder, has been fascinated with nature. Long hours spent playing outdoors, observing swirling leaves, clouds scudding across the sky and the way seed pods spin in the wind: experiences like these inspired Carruth to design a new type of wind turbine.

Drawing on nature for inspiration, his wind turbine design utilizes flexible sails that open and close depending on which direction the wind blows to maximize energy production efficiency. The result is his design project, which he calls Vertical-Axis Sail-Turbine (VAST).

“I was curious about air and wind and being able to use it for energy,” said Carruth. “I took ideas of capturing air energy from things like birds and sail boats. You get an amazing sense of motion looking at the clouds and how they interact with the terrain. And you can get a good understanding of the wind by looking at creeks and water flow.”

Carruth and his six siblings grew up having adventures on their family’s ranch near Austin, Texas. His connection to the natural world developed as they were exploring, building bridges across the creek, climbing trees and walking through pastures.

On his way to CU-Boulder as a freshman, originally to study economics, Carruth drove past a wind farm in north Texas that had the tall, three-blade conventional turbines. He noticed the turbines were spinning at different speeds while some weren’t spinning at all. As he observed differences in how the turbines were performing, Carruth wondered if he could design a turbine that generated power more efficiently, could be used in small-scale applications and would be aesthetically pleasing.

As Carruth settled into his coursework in economics, he couldn’t get the turbine idea out of his mind, so he worked on sketches in his free time.

“In my classes, instead of taking notes I was drawing sketches of turbines,” he said. “I wasn’t interested in studying economics anymore. It took a leap of faith to check out the environmental design program, which turned out to be a better fit for me. I like the freedom of expression that comes with design.”

There are two basic types of wind turbines, which are determined by the direction the turbine turns. The more common type has rigid blades that rotate around a horizontal axis, like a windmill. A vertical axis turbine rotates on an axis perpendicular to the ground, which is what Carruth’s design is based on. While the horizontal axis variety must be oriented to the prevailing wind direction, the vertical axis allows the turbine to collect wind energy from any direction.

The main structure of Carruth’s design will be constructed from aluminum; the bottom sail will be made from carbon fiber and the top sail will be made from rip-stop nylon. He designed the flexible sails to open in order to collect the wind and then fold closed to optimize aerodynamic performance. Even the design is drawn from nature, mimicking a wing or a flower caught in the air.

Environmental design is the process of integrating the artificial built environment into the natural world, says Justin Bellucci, an instructor in the environmental design program and Carruth’s advisor on the VAST project. Students are taught to blend social, ecological, cultural and ethical concerns in their approach to design.

“Michael was looking at biomimicry, taking inspiration from the natural world to build something that’s beautiful, efficient and sustainable,” said Bellucci. “We teach our students to use natural systems to influence design, because design is inherent in everything. ENVD students have a broader picture of the world.”

Carruth is so passionate about his project that he reached out to the College of Engineering and Applied Sciences at CU to find students to help him build a prototype of his turbine. Six mechanical engineering students chose VAST for their senior design project.

“This is something new and innovative in the renewable energy field,” said Jeffrey Gay, fifth-year senior working on VAST. “All of us on the team are very interested in wind turbines, renewable energy and sustainable energy. We’re excited to build a wind turbine and do it in a novel way that’s never been done before, which furthers the technology.”

In 2014, Carruth’s design earned a $1,000 Undergraduate Research Opportunities Program (UROP) grant for preliminary research and a feasibility study resulting in a prototype proving the concept of its design. He recently received a $1,500 grant from the Engineering Excellence Fund. Bolstered by the positive feedback, he is pursuing more funding.

“The engineering team I’m working with has been amazing,” he said. “What we can expect in terms of this initial prototype isn’t going to change the world in terms of the amount of energy we’ll be able to produce, but the way it changes the thinking of how wind turbines interact with the wind will hopefully make a difference.”

Carruth’s plans after graduating include possibly pursuing a graduate degree in architecture or working in the design field. His long-term goal is to have a design firm that focuses on solving some of the serious problems plaguing the world.

“I want to make the world better in terms of exploring new ways of doing architecture,” he said. “Philosophically changing our relationship with problems, which requires a different level of design. I feel a deep connection with trees, wind, water and light. A lot of that is what drives my desire for change.”