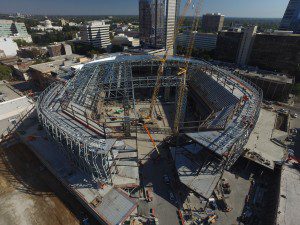 A University of Illinois team has developed predictive visual data analytics tools, called “Flying Superintendent” to automate and streamline today’s time-consuming practices for construction progress monitoring. Their award-winning solution utilizes both images and videos taken with camera drones and four-dimensional Building Information Modeling (BIM) to quickly identify and visually communicate the actual and potential performance problems during execution of construction projects via smartphones and tablets to project participants, on and off site.

The Illinois team is collaborating with Turner Construction Company’s Northern California office to implement the technology on the NBA’s Sacramento Kings new downtown arena, the Golden 1 Center. The goal was to use the resulting color-coded 3D visual production models from University of Illinois’ technology to easily and quickly inform project stakeholders about at-risk locations on a project site, allows them to prioritize problems based on their impact on construction plan, and take corrective actions to improve the reliability of short-term project plans and develop more productive workflows for construction.

“Our web-based solution provides real-time visual reporting of work completed using unordered images collected by any device, from drones to commodity phones,” Goparvar-Fard said. “All personnel, on and off-site, can interact with our 3D visual production models to communicate and analyze work in progress throughout the life of the job. Teams can conduct quality control by comparing as-built models with specifications, and improve safety by having a clear and immediate understanding of potential hazards. The analytics we conduct on these survey-grade 3D visual production models offer construction managers a transparent view into what’s happening on site each day, empowering them to improve reliability in short-term plans and eliminate problems before they happen.”

That collaboration has earned a Turner Innovation Award in Turner’s Fourth Annual Award for Innovation program.

Lincoln Wood, regional manager for virtual design and construction at Turner Construction Company says that while it monitors progress closely on its projects, the aerial images and software analysis being used provides a comprehensive picture of what’s going on, and can highlight how a slowdown in one area may affect the entire project. “The powerful thing about this is that it highlights issues with our schedule grouped by their location in 3D.  This streamlines the management of our weekly work planning efforts by allowing us to visualize and mitigate potential risks to our schedule before they happen.”

Lincoln references that this effort couldn’t have been done without the help of Janie Winning, Turner Construction Company VDC Scheduler, Jim Barrett, National Director of Innovation at Turner Construction Company, Thomas Bartlett, CEO of Image In Flight, and the team at the University of Illinois at Urbana-Champaign, led by Dr. Mani Golparvar-Fard, assistant professor of engineering and CEO of Reconstruct, Inc.

The University of Illinois team received a nearly $1 million Cyber-Physical Systems (CPS) grant through the National Science Foundation for the project, which kicked off in January 2015 and continues through the end of 2019. With the support of the new faculty entrepreneurial fellowship (FEF) program by the Technology Entrepreneur Center (TEC), Golparvar-Fard and the team are commercializing the solution via RECONSTRUCT Inc. a new spinoff company housed in University of Illinois Research Park.

To further streamline the data collection practice, the team is currently developing and testing their recent prototypes to autonomously collect images on construction sites using the drones and ground robots without heavily relying on GPS for navigation purposes. As part of this project, the team is also exploring mechanisms to autonomously mount video cameras on building elements to detect and track construction resources and offer visual data analytics on construction safety and productivity.