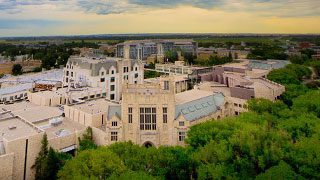 University of Saskatchewan researchers working to protect the environment from oil and mining contamination and improve nuclear power technology have received a $1.5 million boost from the Natural Sciences and Engineering Research Council of Canada (NSERC).

Environmental toxicologist Markus Hecker and co-investigators David Janz and Karsten Liber have been awarded $725,000 to find out how excess selenium released from mining affects aquatic food chains, from biofilms growing on rocks to invertebrates and fish.

“Selenium represents a significant toxicological hazard due to the very narrow range between essentiality and toxicity, especially in fish,” said Hecker, who holds the Canada Research Chair in Predictive Aquatic Toxicology.

Selenium is unusual in that it is both a critical nutrient and a toxin. In humans, for example, trace amounts are needed for proper immune system and thyroid function, but larger amounts can damage the brain, and nervous system, heart and kidneys.

“Our goal is to develop a state-of-the-art risk assessment approach for selenium to support predictive modelling requirements for the Canadian resource industry to help them meet their environmental obligations,” Hecker said.

In his pipeline project, Szpunar will look at ways to manufacture steels resistant to hydrogen-induced cracking (HIC) and stress corrosion cracking (SCC). Hydrogen sulphide, colloquially known as sour gas, is a common component in unrefined petroleum products transported by pipeline, and special steels are required for such environments.

“These two phenomena are responsible for the majority of linepipe failures,” Szpunar said, explaining that his team’s previous research shows that special textured steels can resist both HIC and SSC. “This reveals an emerging but completely unexplored opportunity to manufacture a new generation of linepipe steels with highly improved resistance to two major types of pipeline failure.”

“Lowering the fuel temperature would minimize oxidation of fuel cladding and hydrogen explosion,” Szpunar said. “It will prevent melting of the reactor core as we saw in the tragic accident at Fukushima.”

Szpunar and his team will used advanced modelling techniques to study the properties of composite fuels. This knowledge will support design and construction of new Generation IV nuclear reactors.

The three U of S projects will be funded through NSERC’s Strategic Partnerships Grants program. They are among the 76 across the country announced today at Ryerson University in Toronto.