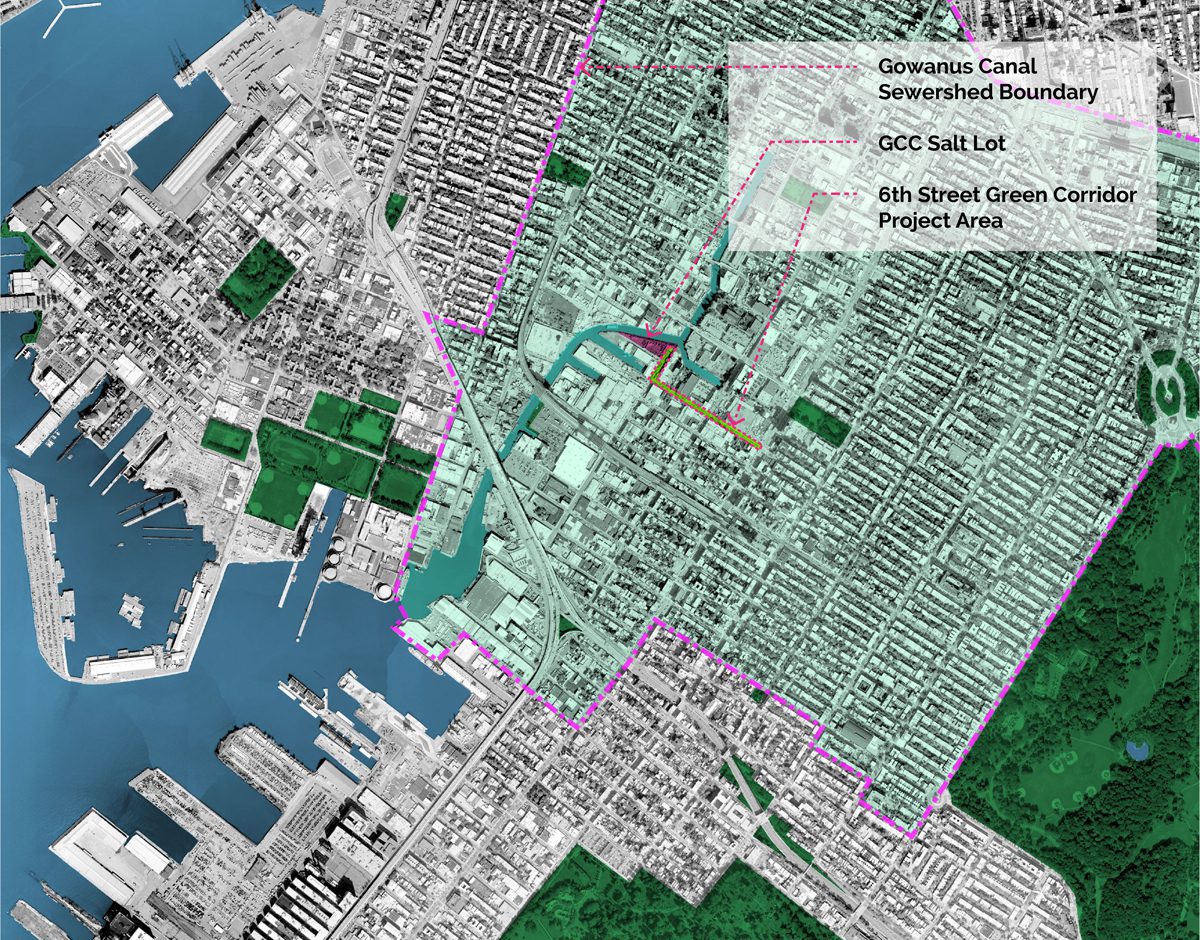 New York City Department of Environmental Protection (DEP) Commissioner Emily Lloyd today joined with Department of Design and Construction (DDC) Commissioner Dr. Feniosky Peña-Mora to announce that construction will begin this spring to install nearly three miles of high level storm sewers in the Gowanus neighborhood. By creating additional capacity in the neighborhood’s drainage system, the $52 million project will help to reduce street flooding and the amount of pollution that may be discharged into the Gowanus Canal during heavy rain storms. Construction of the sewers will be done in two phases. Phase I begins in the spring of 2016, will cost $25 million, and will be completed by the spring of 2018. Phase II will begin in 2018, will cost $27 million, and will be completed in 2020. While the roadway is open to build the sewers, nearly two miles of new water mains will also be installed. Funding for the project is being provided by DEP while DDC will oversee the construction.

“The construction of new storm sewers in Gowanus will help to reduce the flooding that can occur during heavy rain storms, so we are excited to get shovels in the ground,” said DEP Commissioner Emily Lloyd. “This work will also complement the more than $200 million we have already invested to help improve the health of the Gowanus Canal—including the rehabilitation and upgrade of the Flushing Tunnel and Pump Station, and the construction of nearly 100 curbside gardens.”

“In keeping with Mayor de Blasio’s vision for a more resilient city, DDC is proud to be partnering with the Department of Environmental Protection to improve the infrastructure in Gowanus through the installation of these storm sewers,” saidDDC Commissioner Feniosky Peña-Mora. “The people who live and work here will not have to worry about flooding in the event of rain and they can also rest assured that the Gowanus Canal will not continue to be polluted with sewage waste.”

“High-level storm sewers are a high-level achievement for Gowanus,” saidCouncil Member Brad Lander. “They will reduce sewage overflow into our Canal and flooding onto our streets. Step-by-step-by-step—through improvements to the flushing tunnel, bioswales, these high-level storm sewers, and soon the Superfund dredging and tanks—we are building a cleaner and more sustainable Gowanus.”

“Investing in infrastructure means investing in neighborhoods and the New Yorkers who call them home,” said Council Member Stephen Levin. “Additional sewer capacity will improve the quality of life for everyone living around the Gowanus Canal and provide welcome relief for residents who have endured years of flooding during storms. I commend Commissioners Lloyd and Dr. Peña-Mora for moving this important project forward.”

“These High Level Storm Sewers are a critical component of DEP’s multi-faceted grey and green strategy to reduce regular neighborhood street flooding and combined sewage overflows into the Gowanus Canal,” said Gowanus Canal Conservancy Executive Director Andrea Parker. “We applaud this investment in the health of the Gowanus Canal and the live and workability of our neighborhood.”

Over the last 12 months, electric and gas utilities have been relocated to make room beneath the roadways for the new sewers. As part of the construction beginning this spring, 87 new catch basins will be installed to allow stormwater to drain from the streets into 14,000 linear feet of new high level storm sewers. In addition, all existing catch basin drainage connections will be switched from the existing combined sewer to the new high level storm sewers. This will ensure that more wastewater gets routed to a wastewater treatment plant and reduce the likelihood and volume of any combined sewer overflows into the Canal. The work will also include the installation of 10,000 linear feet of new water mains, helping to ensure the reliability of the water delivery system for decades to come.

In late 2013, DEP reactivated the Gowanus Canal Flushing Tunnel for the first time since it was shut down for a full rehabilitation in 2010. The Flushing Tunnel brings more oxygenated water from Buttermilk Channel, lying between Governors Island and Red Hook, to the head of the canal. The rehabilitation work included draining the 1.2 mile long, 12 foot diameter tunnel and inspecting and repairing its brick-lined interior. The installation of three new turbine pumps allow for the injection of as much as 252 million gallons of fresher water into the Canal each day, or roughly 30 percent more than it could before the upgrade. In addition, the tunnel can now operate around the clock, including at low-tide, when the Canal water is at its most stagnant. The activation of the flushing tunnel has already increased the dissolved oxygen content of the water in the Canal which has improved its aesthetics as well as providing a more suitable habitat for plant and aquatic life.

DEP is also building nearly 90 (map and photos here) specially designed curbside gardens in the neighborhoods of Boerum Hill, Carroll Gardens, Gowanus, Park Slope and Prospect Heights. When construction is completed, the curbside gardens, also called bioswales, will have the capacity to collect and absorb nearly 170,000 gallons of stormwater when it rains. It is estimated that the bioswales will capture more than 8 million gallons of stormwater each year, thereby reducing sewer overflows into the Gowanus Canal and improving the health of the waterway. To view a video of a bioswale collecting stormwater gohere. The bioswales will also green the neighborhoods and help clean the air.

DEP manages New York City’s water supply, providing more than one billion gallons of water each day to more than nine million residents, including eight million in New York City. The water is delivered from a watershed that extends more than 125 miles from the city, comprising 19 reservoirs and three controlled lakes. Approximately 7,000 miles of water mains, tunnels and aqueducts bring water to homes and businesses throughout the five boroughs, and 7,500 miles of sewer lines and 96 pump stations take wastewater to 14 in-city treatment plants. DEP has nearly 6,000 employees, including almost 1,000 in the upstate watershed. In addition, DEP has a robust capital program, with a planned $14 billion in investments over the next 10 years that will create up to 3,000 construction-related jobs per year. This capital program is responsible for critical projects like City Water Tunnel No. 3; the Staten Island Bluebelt program, an ecologically sound and cost-effective stormwater management system; the city’s Watershed Protection Program, which protects sensitive lands upstate near the city’s reservoirs in order to maintain their high water quality; and the installation of more than 820,000 Automated Meter Reading devices, which will allow customers to track their daily water use, more easily manage their accounts and be alerted to potential leaks on their properties. For more information, visitnyc.gov/dep, like us on Facebook, or follow us on Twitter.

DDC is the City’s primary capital construction project manager. DDC provides communities with new or renovated public buildings, such as firehouses, libraries, police precincts, courthouses, and senior centers. What’s more, DDC delivers new or upgraded roadways, sewers, water mains, and other infrastructure projects in communities throughout the city. Over the last decade, DDC has completed more than 750 miles of new roadways and sidewalks, 700 miles of water mains, and 500 miles of storm and sanitary sewers—all of which are essential for a vibrant city like New York. To manage this $9 billion portfolio, DDC partners with other City agencies and with emerging and world-renowned architects and consultants, whose experience and creativity bring efficient, innovative, and environmentally-conscious design and construction strategies to City projects. For more information, please visit nyc.gov/DDC.