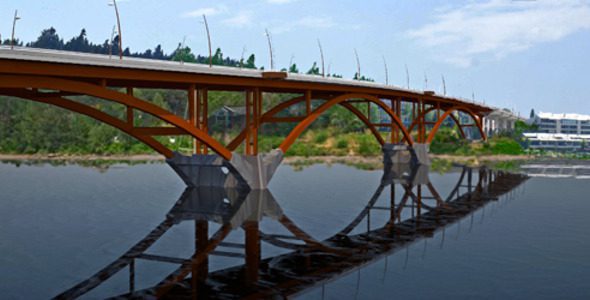 The $319 million bridge, which relied on $38 million in federal funds – including a $17.7 million Transportation Investment Generating Economic Recovery (TIGER) grant – replaces a 91-year-old bridge that was unable to keep up with the growing volume of traffic using it.

“Investing in our nation’s infrastructure helps to strengthen our economy and ensure the safety of the traveling public on aging roads and bridges,” said U.S. Transportation Secretary Anthony Foxx. “By reducing congestion and improving access for pedestrians and bicyclists, this new bridge will help to invigorate Portland’s local economy and improve the quality of life for area residents.”

The original Sellwood Bridge was built in 1925 to replace the Spokane Street Ferry, which shuttled passengers across the Willamette River between Sellwood and West Portland. Because it was the area’s first bridge over the Willamette without trolley tracks, it was not designed for the weight of streetcars and – consequently – was less substantial than the city’s other river crossings and more prone to damage from heavy traffic volume and seismic activity.

The new Sellwood Bridge – nearly 2,000 feet long – was designed to the latest seismic standards and construction engineering, to ensure that it can remain standing through an earthquake equal to the largest felt there in the last 1,000 years. In addition, it offers shoulders and wider lanes for drivers, wider sidewalks for pedestrians, and access for bikes to nearby trails.

“The original Sellwood Bridge did an outstanding job for this community, and the new one is ready to continue that tradition,” said FHWA Deputy Administrator Kim. “It perfectly illustrates the importance of transportation investments that help to ensure the safety of Portlanders for generations to come.”

The new Sellwood Bridge is Oregon’s first registered Greenroads project, a certification recognizing the bridge’s overall sustainability. Notably, workers recycled 91 percent of the project’s overall waste, which ensures less material goes to local landfills, and cedar trees removed on either side of the river were donated to local Native American tribes for use in traditional garments and ceremonial items.